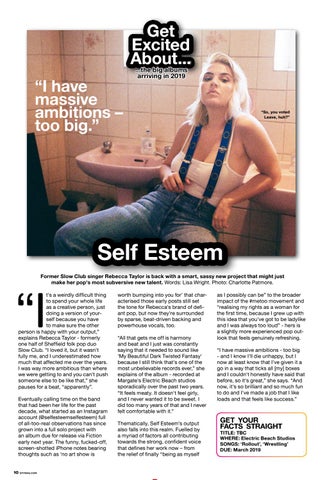 Get Excited About... “I have massive ambitions – too big.”

t's a weirdly difficult thing to spend your whole life as a creative person, just doing a version of yourself because you have to make sure the other person is happy with your output,” explains Rebecca Taylor - formerly one half of Sheffield folk pop duo Slow Club. “I loved it, but it wasn't fully me, and I underestimated how much that affected me over the years. I was way more ambitious than where we were getting to and you can't push someone else to be like that,” she pauses for a beat, “apparently”. Eventually calling time on the band that had been her life for the past decade, what started as an Instagram account (@selfesteemselfesteem) full of all-too-real observations has since grown into a full solo project with an album due for release via Fiction early next year. The funny, fucked-off, screen-shotted iPhone notes bearing thoughts such as 'no art show is

worth bumping into you for' that characterised those early posts still set the tone for Rebecca's brand of defiant pop, but now they're surrounded by sparse, beat-driven backing and powerhouse vocals, too. “All that gets me off is harmony and beat and I just was constantly saying that it needed to sound like 'My Beautiful Dark Twisted Fantasy' because I still think that's one of the most unbelievable records ever,” she explains of the album - recorded at Margate's Electric Beach studios sporadically over the past two years. “It feels meaty. It doesn't feel girly, and I never wanted it to be sweet. I did too many years of that and I never felt comfortable with it.” Thematically, Self Esteem's output also falls into this realm. Fuelled by a myriad of factors all contributing towards the strong, confident voice that defines her work now – from the relief of finally “being as myself

as I possibly can be” to the broader impact of the #metoo movement and “realising my rights as a woman for the first time, because I grew up with this idea that you've got to be ladylike and I was always too loud” - hers is a slightly more experienced pop outlook that feels genuinely refreshing. “I have massive ambitions - too big - and I know I'll die unhappy, but I now at least know that I've given it a go in a way that ticks all [my] boxes and I couldn't honestly have said that before, so it's great,” she says. “And now, it's so brilliant and so much fun to do and I've made a job that I like loads and that feels like success.”

GET YOUR FACTS STRAIGHT 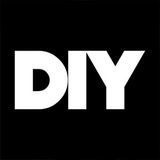