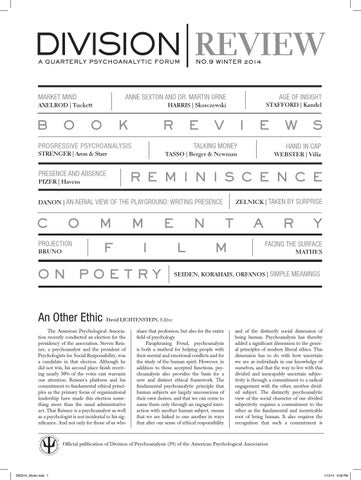 ON POETRY An Other Ethic

DANON | AN AERIAL VIEW OF THE PLAYGROUND: WRITING PRESENCE

The American Psychological Association recently conducted an election for the presidency of the association. Steven Reisner, a psychoanalyst and the president of Psychologists for Social Responsibility, was a candidate in that election. Although he did not win, his second place finish receiving nearly 30% of the votes cast warrants our attention. Reisnerâ&amp;#x20AC;&amp;#x2122;s platform and his commitment to fundamental ethical principles as the primary focus of organizational leadership have made this election something more than the usual administrative act. That Reisner is a psychoanalyst as well as a psychologist is not incidental to his significance. And not only for those of us who

share that profession, but also for the entire field of psychology. Paraphrasing Freud, psychoanalysis is both a method for helping people with their mental and emotional conflicts and for the study of the human spirit. However, in addition to these accepted functions, psychoanalysis also provides the basis for a new and distinct ethical framework. The fundamental psychoanalytic principle that human subjects are largely unconscious of their own desires, and that we can come to name them only through an engaged interaction with another human subject, means that we are linked to one another in ways that alter our sense of ethical responsibility

and of the distinctly social dimension of being human. Psychoanalysis has thereby added a significant dimension to the general principles of modern liberal ethics. This dimension has to do with how uncertain we are as individuals in our knowledge of ourselves, and that the way to live with this divided and inescapably uncertain subjectivity is through a commitment to a radical engagement with the other, another divided subject. The distinctly psychoanalytic view of the social character of our divided subjectivity requires a commitment to the other as the fundamental and inextricable root of being human. It also requires the recognition that such a commitment is 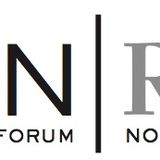