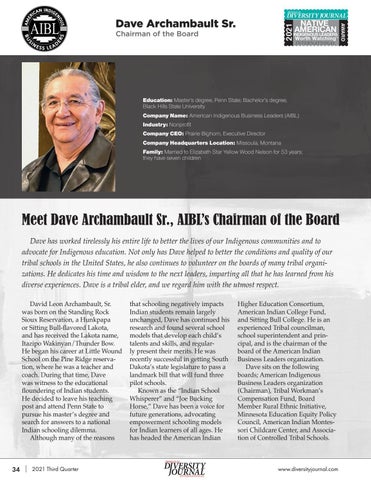 Meet Dave Archambault Sr., AIBL’s Chairman of the Board Dave has worked tirelessly his entire life to better the lives of our Indigenous communities and to advocate for Indigenous education. Not only has Dave helped to better the conditions and quality of our tribal schools in the United States, he also continues to volunteer on the boards of many tribal organizations. He dedicates his time and wisdom to the next leaders, imparting all that he has learned from his diverse experiences. Dave is a tribal elder, and we regard him with the utmost respect. David Leon Archambault, Sr. was born on the Standing Rock Sioux Reservation, a Hunkpapa or Sitting Bull-flavored Lakota, and has received the Lakota name, Itazipo Wakinyan/Thunder Bow. He began his career at Little Wound School on the Pine Ridge reservation, where he was a teacher and coach. During that time, Dave was witness to the educational floundering of Indian students. He decided to leave his teaching post and attend Penn State to pursue his master’s degree and search for answers to a national Indian schooling dilemma. Although many of the reasons

that schooling negatively impacts Indian students remain largely unchanged, Dave has continued his research and found several school models that develop each child’s talents and skills, and regularly present their merits. He was recently successful in getting South Dakota’s state legislature to pass a landmark bill that will fund three pilot schools. Known as the “Indian School Whisperer” and “Joe Bucking Horse,” Dave has been a voice for future generations, advocating empowerment schooling models for Indian learners of all ages. He has headed the American Indian