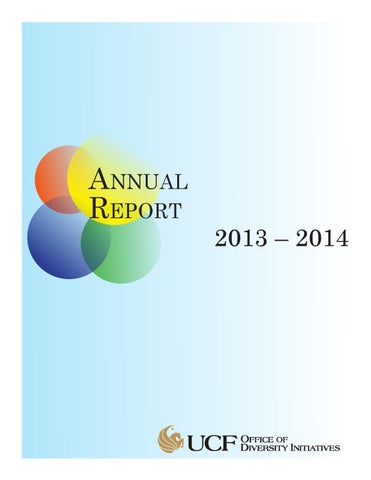 Areas of Focus for 2013 – 2014 1. Update and revise the Mission Statement and Goals for the department Dr. Valarie King, founding Director of the Office of Diversity Initiatives, retired on September 30, 2013. In preparation for filling the position of Director, a search committee, selected by Dr. Rick Schell, Vice President and Chief of Staff, was tasked with developing a new Mission Statement and Goals for the department (see above). The Mission Statement and Goals provided purpose and direction to the subsequent search process. 2. Conduct a national search for a new Director for the department Under the direction of Dr. Rick Schell, a committee chaired by Dr. Gordon Chavis, Associate Vice President, Student Affairs, conducted a national search to fill the position of Director, Office of Diversity Initiatives. The initial pool of applicants was comprised of approximately 225 individuals, five of whom were invited to the University of Central Florida to interview. One candidate was offered the position, but declined. The position was posted again in June 2014, with revisions to the position title (Chief Diversity Officer) and beginning salary. 3. Continue providing high-quality services with a declining staff Since February 1, 2012, full-time staff in the department has declined from six individuals to four. During this time, all existing programs and services were retained. The staff worked with dedication and creativity during 2013 - 2014 to absorb the additional responsibilities and 1

tasks once met by others, and never missed an opportunity to broaden the impact of the department on the university community.

Highlights of Selected Programs and Projects •

In anticipation of the arrival of a new Director/Chief Diversity Officer, Katie Pomp, Administrative Assistant and Office Manager, updated and revised the department’s General Operating Procedures Manual. She also updated the manual provided to student employees upon joining the Office of Diversity Initiatives.

The Leadership Enhancement Program (LEP) class of 2013 - 2014 included 12 UCF scholars. Carmen Afonso, the Coordinator, introduced seven new speakers this year. These presenters covered topics such as negotiation, teams and teamwork, and strategic planning. Carmen also took on the task of updating the LEP Procedures Manual during the current year.

The LEGACY Leadership and Mentoring Program, coordinated by Zakiya McGhie, sponsored seminars focused on Legacy’s four pillars of success: Personal Identity, Leadership, Career Development, and Scholarship. These seminars exposed scholars to valuable insights and resources, and they encouraged the students to develop skills related to each pillar. Further, the workshops provided a meaningful incentive for the scholars to remain in the program. LEGACY continued its annual community engagement initiative called LEGACY Connect. This year, the educational outreach program for “at-risk” youth was held at Timber Creek High School. In 2013 - 2014, LEGACY attempted to expand the program and came close to fulfilling this goal. Unfortunately, this was not accomplished as a second high school unexpectedly had to cancel its participation. Expanding this outreach initiative remains a goal for future years. In the upcoming year, the LEGACY Leadership and Mentoring Program will have a new Coordinator, Stefanie Campbell. An updated LEGACY Procedures Manual, completed by Zakiya and Stefanie during 2013 - 2014, will provide for a smooth transition of the program to Stefanie.

Education, training, and scholarship activities occupy a prominent role in the Office of Diversity Initiatives’ operation. The vast majority of our education and training sessions were provided by Interim Director and diversity educator, Barbara Thompson, with support from Dayanara Hudson, Program Assistant. The training schedule was supplemented by guest presenters from Florida Hospital, UCF OD & Training, and UCF Student Legal Services (Summer), Seminole State College, Universal Parks & Resorts, and UCF School of Social Work (Fall), and UCF Department of Modern Languages and Literatures, UCF Department of Music, and Student Development and Enrollment Services (Spring). Overall, during 2013 – 2014, there was a reduction in the number of workshops, participants, topics, and sessions held at regional campuses. In total, 174 workshops were provided, a decrease of 18 sessions from 2012 - 2013 (see Figure A). The number of workshop participants was 4,575, which was down by 555 from the previous year (see Figure B). There were 46 distinct workshop topics featured with the addition of several new topics (see Figure C). Further ODI’s focus on education and training included 28 sessions held at six regional campuses plus the Rosen College of Hospitality Management (see Figure D). All of the declines during the past year are directly attributable to Barbara Thompson, the department’s diversity educator, assuming the duties and responsibilities of Interim Director. Even though declines in the Office of Diversity Initiatives’ numbers were observed, if one 2

looks at the number of “trainer months” of education delivered (i.e., the number of training participants divided by the average number of participants per month), a more accurate comparison between years is achieved. Using as a baseline the department’s overall highest year (2010 – 2011), Barbara still provided the equivalent of more than 13 months of training in a 12 month period.

The ODI assessment process for education and training activities continued as one of the primary strategies to gather training feedback. During 2013 – 2014, the department examined an aspect of the point-of-contact evaluations not previously considered. In addition to the overall ratings given to workshops (94% rated as “Excellent” and 6% rated as “Good”), ODI looked at responses to an evaluative question designed to explore the learning/attitudinal outcomes derived from participation in the diversity workshops (see Figure E). Participants marked as many of the outcomes that applied to them. Of the 1,073 individuals who responded to this question, it is interesting to note that 485 (or approximately 45%) indicated that the workshops were valuable to them professionally. This is of significance as it indicates a perceived direct connection between diversity training and on-the-job performance. 3

Under the direction of Barbara Thompson, two interns worked on diversity-related projects. Dane Fishburn, a UCF senior Biology and Psychology major, developed and delivered two workshops focused on autism spectrum disorder. Roberto Ramirez, a UCF student with an interest in social class in America, dedicated his time with ODI to researching the impacts of socioeconomic status on the college experience.

This year, ODI sponsored two DiversiTeas. On September 18, 2013, UCF Sociology doctoral student, Sabrina Deaton, presented “Call Me Roma, Not Gypsy.” On March 27, 2014, Sara Van Arsdel and Claudine Tomlinson-Burney from the Orange County Regional History Center presented “Civil Rights in Central Florida.” The September and March DiversiTeas were broadcast to our colleagues at the regional campuses. The DiversiTeas were organized and coordinated by Barbara Thompson with support from Dayanara Hudson.

The Diversity Breakfast is a signature event sponsored by the Office of Diversity Initiatives. Planning the Breakfast takes an extraordinary amount of work and was coordinated by Katie Pomp. The 2013 keynote speaker was Jennifer Brown, a passionate advocate and social entrepreneur committed to guiding organizations to create healthier workplace cultures. Approximately 600 individuals from the UCF and Central Florida communities attended. Students and colleagues at eight of the regional campuses also joined the event via Adobe Connect. The Diversity Week poster was designed by Dayanara Hudson, and as part of the Breakfast, 1,161 pounds of food were collected for the Knights Helping Knights food pantry. Noteworthy Diversity Week programs included the following presentations:  The Waiting Tree featuring UCF alumna and author, Lyndsay Moynihan,  WITNESS: A Reader’s Theatre in Commemoration of Kristallnacht, a collaborative event performed and/or hosted by ODI, Holly McDonald and her students from the UCF Theatre Department, UCF Career Services and Regional Campuses, the Holocaust Memorial Resource and Education Center of Florida, and the Interfaith Council of Central Florida, and  Understanding Bullying in the Classroom, a workshop presented by Barbara Thompson to 21 teachers from nations around the world.

Planning for the 2014 Diversity Breakfast is well under way. In fact, due to the promotional efforts of Katie Pomp, the 2014 event sold out during the current fiscal year. This is the first time the Breakfast sold out this far in advance. •

The Office of Diversity Initiatives sponsored the Diversity Track of the 2014 Summer Faculty Development Conference. The theme of the track was “Creating Inclusive College Classrooms.” Diversity Track scholars worked diligently on developing ideas designed to foster the tenets of inclusion in today’s higher education classrooms. This track, coordinated by Barbara Thompson, included 20 scholars from six schools and colleges.

A cooperative training initiative with Student Development and Enrollment Services is in its fourth year. The training program is designed to enhance the diversity-related awareness, knowledge, and skills of approximately 600 SDES team members. To date, this venture has resulted in approximately 400 individuals completing the required 23 hours of diversity training with more than 100 individuals involved in different phases of this SDES Diversity Certificate Series.

At the suggestion of Dr. Rick Schell, a Student Poster Contest to create the 2014 Diversity Week poster was conducted during the year. Submissions were accepted from November 19, 2013 through April 1, 2014. ODI received 45 submissions from students in different academic disciplines. Entries were reviewed by seven guest judges, and the top fifteen were selected for inclusion in a display in the UCF Library scheduled for October 2014. The first place award was earned by UCF Junior, Ms. Ebone Grayson. Dayanara Hudson and Barbara Thompson were responsible for the contest.

Barbara Thompson continued to work with the UpStanders Advisory Committee and serve on the Board of Directors at the Holocaust Memorial Resource and Education Center of Florida. Barbara also presented workshops for several community organizations including the Holocaust Center, Community Coordinated Care for Children, Inc. (4C), City Year, the Orange County Regional History Center, and Seminole State College. Barbara was invited to make two presentations at the annual F.A.C.E. (Florida Association of Code Enforcement) conference in Tampa, Florida.

Barbara Thompson and Dayanara Hudson created the department’s first online diversity workshop, Performance Standards for UCF’s Cultural Competencies. The workshop was officially launched at the Summer Faculty Development Conference in the Diversity Track on May 5, 2014. By June 30, 2014, 12 individuals had completed the course.

The overriding concern for the upcoming year is the hiring of a Chief Diversity Officer for the university. This individual will determine the direction of this office as well as the future of diversity and inclusion efforts at our institution. The office is transitioning to a new name, the Office of Diversity and Inclusion. As part of this transition process, the UCF community will require not only familiarity with the new name, but also an understanding of the importance of this change. 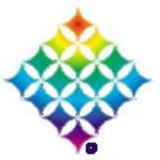