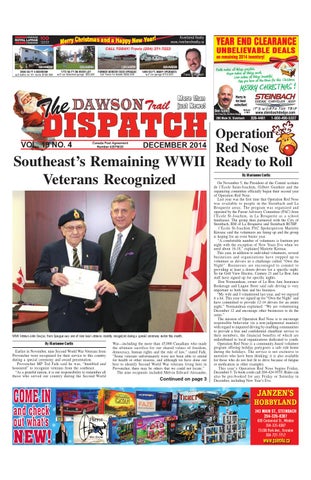 WWII Veteran John Owczar, from Sprague was one of nine local veterans recently recognized during a special ceremony earlier this month.

By Marianne Curtis Earlier in November, nine Second World War Veterans from Provencher were recognized for their service to this country during a special ceremony and award presentation. Provencher MP Ted Falk said he was, “humbled and honoured” to recognize veterans from the southeast. “As a grateful nation, it is our responsibility to remember all those who served our country during the Second World

War—including the more than 45,000 Canadians who made the ultimate sacrifice for our shared values of freedom, democracy, human rights and the rule of law,” stated Falk. “Some veterans unfortunately were not been able to attend for health or other reasons, and although we have done our best to identify Second World War veterans living here in Provencher, there may be others that we could not locate.” The nine recipients included Melvin Edward Alexander,

By Marianne Curtis On November 5, the President of the Comité scolaire de l’École Saint-Joachim, Gilbert Gauthier and the organizing committee officially began their second year of Operation Red Nose. Last year was the first time that Operation Red Nose was available to people in the Steinbach and La Broquerie areas. The program was organized and operated by the Parent Advisory Committee (PAC) from l’École St-Joachim, in La Broquerie as a school fundraiser. The group then partnered with the City of Steinbach, RM of La Broquerie and Steinbach RCMP. l’École St-Joachim PAC Spokesperson Mariette Kirouac said the volunteers are lining up and the group is hoping for an even busier year. “A comfortable number of volunteers is fourteen per night with the exception of New Years Eve when we need about 16-18,” explained Mariette Kirouac. This year, in addition to individual volunteers, several businesses and organizations have stepped up to volunteer as drivers in a challenge called “Own the Night”. Businesses are encouraged to commit to providing at least a dozen drivers for a specific night. So far Golf View Electric, Century 21 and Le Bon Ami staff have signed up for specific nights. Don Normandeau, owner of Le Bon Ami Insurance Brokerage and Liquor Store said safe driving is very important to both him and his business. “My wife and I volunteered last year, and we enjoyed it a lot. This year we signed up for “Own the Night” and have committed to provide 12-14 drivers for an entire night,” Normandeau explained. “We are volunteering December 12 and encourage other businesses to do the same.” The mission of Operation Red Nose is to encourage responsible behaviour (in a non-judgmental manner) with regard to impaired driving by enabling communities to provide a free and confidential chauffeur service to their members, the financial benefits of which are redistributed to local organizations dedicated to youth. Operation Red Nose is a community-based volunteer program offering holiday partygoers a safe ride home during the holidays. The service is not exclusive to motorists who have been drinking; it is also available for those who do not feel fit to drive because of fatigue or medication as other examples. This year’s Operation Red Nose begins Friday, December 5. To book a ride call 204-424-9555. Rides can also be pre-booked for any Friday or Saturday in December, including New Year’s Eve.