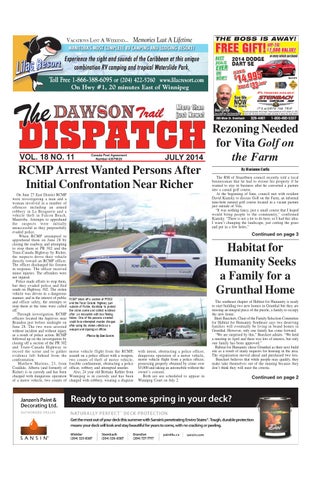 Rezoning Needed for Vita Golf on the Farm RCMP Arrest Wanted Persons After Initial Confrontation Near Richer On June 27 East District RCMP were investigating a man and a woman involved in a number of offences including an armed robbery in La Broquerie and a vehicle theft in Falcon Beach, Manitoba. Attempts to apprehend the suspects were initially unsuccessful as they purposefully evaded police. When RCMP attempted to apprehend them on June 28 by closing the roadway and attempting to stop them at PR 302 and the Trans-Canada Highway by Richer, the suspects drove their vehicle directly toward an RCMP officer. The officer discharged his firearm in response. The officer received minor injuries. The offenders were not injured. Police made efforts to stop them, but they evaded police and fled south on Highway 302. The stolen vehicle was driven in a dangerous manner, and in the interest of public and officer safety, the attempts to stop them at the time were called off. Through investigation, RCMP officers located the fugitives near Brandon just before midnight on June 28. The two were arrested without incident and without injury as a result of police action. RCMP followed up on the investigation by closing off a section of the PR 302 and Trans-Canada Highway to record the scene and to gather evidence left behind from the confrontation. Matthew Martens, 23, from Coaldale, Alberta (and formerly of Richer) is in custody and has been charged with dangerous operation of a motor vehicle, two counts of

By Marianne Curtis The RM of Stuartburn council recently told a local businessman that he had to rezone his property if he wanted to stay in business after he converted a pasture into a casual golf course. At the beginning of June, council met with resident David Kiansky to discuss Golf on the Farm, an informal nine-hole natural golf course located in a vacant pasture just outside of Vita. “It was nothing fancy, just a small course that I hoped would bring people to the community,” confirmed Kiansky. “There is not a lot to do here, so I had this idea. I wasn’t changing the landscape, just cutting the grass and put in a few holes.”

Habitat for Humanity Seeks a Family for a Grunthal Home RCMP block off a section of PR302 and the Trans Canada Highway just outside of Richer, Manitoba to protect the crime scene and collect evidence after an encounter with two fleeing felons. One of the persons arrested could face attempted murder charges after using his stolen vehicle as a weapon and injuring an officer. Photos by Dan Guetre

motor vehicle flight from the RCMP, assault on a police officer with a weapon, two counts of theft of motor vehicle, forcible confinement, obstructing a police officer, robbery and attempted murder. Also, 24 year old Brittany Kehler from Winnipeg is in custody and has been charged with robbery, wearing a disguise

The southeast chapter of Habitat for Humanity is ready to start building two new homes in Grunthal but they are missing an integral piece of the puzzle, a family to occupy the new home. Sheri Bueckert, Chair of the Family Selection Committee for Habitat for Humanity Southeast says two deserving families will eventually be living in brand homes in Grunthal. However, only one family has come forward. “We are surprised by this,” Bueckert admits. “We held a meeting in April and there was lots of interest, but only one family has been approved.” Habitat for Humanity chose Grunthal as their next build site as a result of many requests for housing in the area. The organization moved ahead and purchased two lots. Bueckert believes that while people may qualify, they make take themselves out of the running because they don’t think they will meet the criteria.