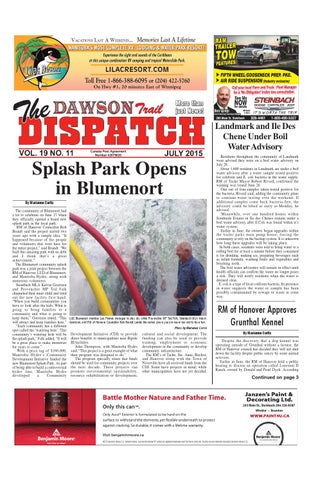 Splash Park Opens in Blumenort By Marianne Curtis The community of Blumenort had a lot to celebrate on June 27 when they officially opened a brand new splash park in the local park. RM of Hanover Councillor Bob Brandt said the project started two years ago with a simple idea. “It happened because of the people and volunteers that were here for the entire project,” said Brandt. “We built this amazing park with no debt and I think that’s a great achievement.” The Blumenort community splash park was a joint project between the RM of Hanover, LUD of Blumenort, and Manitoba Hydro, along with numerous volunteers. Steinbach MLA Kelvin Goertzen and Provencher MP Ted Falk channeled their inner child and tried out the new facility first hand. “When you build communities you have to look after the kids. What is going to bring families to a community and what is going to keep them,” Goertzen stated. “This LUD Blumenort member Leo Penner manages to stay dry while Provencher MP Ted Falk, Steinbach MLA Kelvin will attract and keep families here.” Goertzen, and RM of Hanover Councillor Bob Brandt (under the water) prove you are never too old to have fun. “Each community has a different Photo by Marianne Curtis spot called the ‘watering hole’. This cultural and social development. The Development Initiative (CDI) to provide community’s watering hole will be the splash park,” Falk added. “It will direct benefits to municipalities near Bipole funding can also be used to provide training, employment or economic be a great place to make memories III facilities. John Thompson, with Manitoba Hydro development in the community or develop for years to come.” With a price tag of $160,000, said, “This project is a great example of what community infrastructure. The RM’s of Tache, Ste. Anne, Ritchot, Manitoba Hydro’s Community their program was designed to do.” The program specially states that funds and Hanover along with the Town of Development Initiative funded the new Blumenort Splash Park. As part should be used for community projects over Niverville have all received funds from the of being able to build a controversial the next decade. These projects can CDI. Some have projects in mind, while hydro line, Manitoba Hydro promote environmental sustainability, other municipalities have not yet decided. developed a Community resource rehabilitation or development,

Residents throughout the community of Landmark were advised they were on a boil water advisory on July 26. About 1,600 residents in Landmark are under a boil water advisory after a water sample tested positive for coliform and E. coli bacteria in the water supply. RM of Tache Mayor Robert Rivard, confirmed the warning was issued June 26. One out of four samples taken tested positive for the bacteria, Rivard said, adding the community plans to continue water testing over the weekend. If additional samples come back bacteria-free, the advisory could be lifted as early as Monday, he advised. Meanwhile, over one hundred homes within Southside Estates in Ile des Chenes remain under a boil water advisory after E.Coli was found within it’s water system. Earlier in June, the owners began upgrades within the trailer parks main pump house, forcing the community to rely on the backup system. It is unknown how long these upgrades will be taking place. In both cases, residents were told to bring water to a rolling boil for at least a minute before they consumed it for drinking, making ice, preparing beverages such as infant formula, washing fruits and vegetables and brushing teeth. The boil water advisories will remain in effect until health officials can confirm the water no longer poses a risk. They will notify residents when the water is deemed clear. E. coli is a type of fecal coliform bacteria. Its presence in water suggests the water or sample has been possibly contaminated by sewage or waste in some way.

RM of Hanover Approves Grunthal Kennel By Marianne Curtis Despite the discovery that a dog kennel was operating outside of Grunthal without a license, the RM of Hanover council has decided they will not shut down the facility despite public outcry by some animal activists. Earlier in June, the RM of Hanover held a public hearing to discuss an operation called Lonesum D Ranch, owned by Donald and Pearl Dyck. According