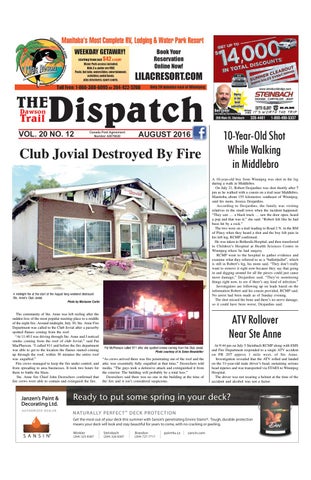 A 10-year-old boy from Winnipeg was shot in the leg during a walk in Middlebro. On July 21, Robert Desjardins was shot shortly after 7 pm as he walked with a cousin on a trail near Middlebro, Manitoba, about 155 kilometres southeast of Winnipeg, said his mom, Jessica Desjardins. According to Desjardins, the family was visiting relatives in the small town when the incident happened. “They saw … a black truck … saw the door open, heard a pop and that was it,” she said. “Robert felt like he had been hit by a rock.” The two were on a trail leading to Road 2 N. in the RM of Piney when they heard a shot and the boy felt pain in his left leg, RCMP confirmed. He was taken to Bethesda Hospital, and then transferred to Children’s Hospital at Health Sciences Centre in Winnipeg where he had surgery. RCMP went to the hospital to gather evidence and examine what they referred to as a “bullet/pellet”, which is still in Robert’s leg, his mom said. “They don’t really want to remove it right now because they say that going in and digging around for all the pieces could just cause more damage,” Desjardins said. “They’re monitoring things right now, to see if there’s any kind of infection.” Investigators are following up on leads based on the information Robert and his cousin provided, RCMP said. No arrest had been made as of Sunday evening. The shot missed the bone and there’s no nerve damage, so it could have been worse, Desjardins said.

A midnight fire at the start of the August long weekend destroyed Ste. Anne’s Club Jovial. Photo by Marianne Curtis

The community of Ste. Anne was left reeling after the sudden loss of the most popular meeting place to a middle of the night fire. Around midnight, July 30, Ste. Anne Fire Department was called to the Club Jovial after a passerby spotted flames coming from the roof. “At 11:40 I was driving through Ste. Anne and I noticed smoke coming from the roof of club Jovial,” said Pat MacPherson. “I called 911 and before the fire department was able to get to the location the flames started coming up through the roof, within 30 minutes the entire roof was engulfed.” Fire crews managed to keep the fire under control, and from spreading to area businesses. It took two hours for them to battle the blaze. Ste. Anne fire Chief John Desrochers confirmed that fire crews were able to contain and extinguish the fire.

10-Year-Old Shot While Walking in Middlebro

ATV Rollover Near Ste Anne Pat McPherson called 911 after she spotted smoke coming from the Club Jovial. Photo courtesy of In Seine Newsletter

“As crews arrived there was fire penetrating out of the roof and the attic was essentially fully engulfed at that time,” Desrochers told media. “The guys took a defensive attack and extinguished it from the exterior. The building will probably be a total loss.” Desrochers said there was no one in the building at the time of the fire and it isn’t considered suspicious.

At 9:44 pm on July 5 Steinbach RCMP along with EMS and Fire Department responded to a single ATV accident on PR 207 approx 1 mile west, of Ste Anne. Investigation revealed that the ATV rolled and landed on the 31-year-old male driver’s head, sustaining serious head injuries and was transported via STARS to Winnipeg Hospital. The driver was not wearing a helmet at the time of the accident and alcohol was not a factor.