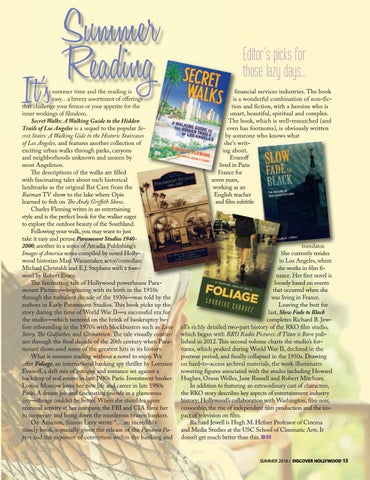 summer time and the reading is easy…a breezy assortment of oﬀerings that challenge your ﬁtness or your appetite for the inner workings of ﬁlmdom. Secret Walks: A Walking Guide to the Hidden Trails of Los Angeles is a sequel to the popular Secret Stairs: A Walking Gide to the Historic Staircases of Los Angeles, and features another collection of exciting urban walks through parks, canyons and neighborhoods unknown and unseen by most Angelenos. e descriptions of the walks are ﬁlled with fascinating tales about such historical landmarks as the original Bat Cave from the Batman TV show to the lake where Opie learned to ﬁsh on e Andy Griﬃth Show. Charles Fleming writes in an entertaining style and is the perfect book for the walker eager to explore the outdoor beauty of the Southland. Following your walk, you may want to just take it easy and peruse Paramount Studios 19402000, another in a series of Arcadia Publishing’s Images of America series compiled by noted Hollywood historian Marc Wanamaker, actor/comedian Michael Christaldi and E.J. Stephens with a foreword by Robert Evans. e fascinating tale of Hollywood powerhouse Paramount Pictures—beginning with its birth in the 1910s through the turbulent decade of the 1930s—was told by the authors in Early Paramount Studios. is book picks up the story during the time of World War II—a successful era for the studio—which teetered on the brink of bankruptcy before rebounding in the 1970’s with blockbusters such as Love Story, e Godfather, and Chinatown. e tale visually continues through the ﬁnal decade of the 20th century when Paramount showcased some of the greatest hits in its history. What is summer reading without a novel to enjoy. We oﬀer Foliage, an international banking spy thriller by Lorraine Evanoﬀ, a deft mix of intrigue and romance set against a backdrop of real events in late 1980s Paris. Investment banker Louise Moscow loves her new life and career in late 1980s Paris. A dream job and fascinating friends in a glamorous city—things couldn’t be better. When she stumbles upon criminal activity at her company, the FBI and CIA force her to cooperate and bring down the murderous brazen bankers. On Amazon, Simon Levy wrote “… an incredibly timely book, especially given the release of the Panama Papers and the exposure of corruption within the banking and

Editor’s picks for those lazy days.. financial services industries. The book is a wonderful combination of non-fiction and fiction, with a heroine who is smart, beautiful, spiritual and complex. The book, which is well-researched (and even has footnotes), is obviously written by someone who knows what she's writing about. Evanoﬀ lived in Paris France for seven years, working as an English teacher and ﬁlm subtitle

translator. She currently resides in Los Angeles, where she works in ﬁlm ﬁnance. Her ﬁrst novel is loosely based on events that occurred when she was living in France. Leaving the best for last, Slow Fade to Black completes Richard B. Jewell’s richly detailed two-part history of the RKO ﬁlm studio, which began with RKO Radio Pictures: A Titan is Born published in 2012. is second volume charts the studio’s fortunes, which peaked during World War II, declined in the postwar period, and ﬁnally collapsed in the 1950s. Drawing on hard-to-access archival materials, the work illuminates towering ﬁgures associated with the studio including Howard Hughes, Orson Welles, Jane Russell and Robert Mitchum. In addition to featuring an extraordinary cast of characters, the RKO story describes key aspects of entertainment industry history; Hollywood’s collaboration with Washington, ﬁlm noir, censorship, the rise of independent ﬁlm production and the impact of television on ﬁlm. Richard Jewell is Hugh M. Hefner Professor of Cinema and Media Studies at the USC School of Cinematic Arts. It doesn’t get much better than this. DH 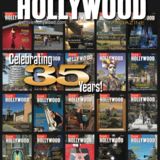