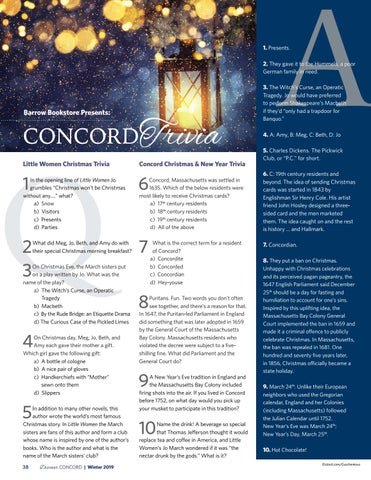 2. They gave it to the Hummels, a poor German family in need. 3. The Witch’s Curse, an Operatic

In the opening line of Little Women Jo grumbles “Christmas won’t be Christmas without any….” what? a) Snow b) Visitors c) Presents d) Parties

What did Meg, Jo, Beth, and Amy do with their special Christmas morning breakfast?

On Christmas Eve, the March sisters put on a play written by Jo. What was the name of the play? a) The Witch’s Curse, an Operatic Tragedy b) Macbeth c) By the Rude Bridge: an Etiquette Drama d) The Curious Case of the Pickled Limes

On Christmas day, Meg, Jo, Beth, and Amy each gave their mother a gift. Which girl gave the following gift: a) A bottle of cologne b) A nice pair of gloves c) Handkerchiefs with “Mother” sewn onto them d) Slippers

Tragedy. Jo would have preferred to perform Shakespeare’s Macbeth if they’d “only had a trapdoor for Banquo.”

6. C: 19th century residents and beyond. The idea of sending Christmas cards was started in 1843 by Englishman Sir Henry Cole. His artist friend John Hosley designed a threesided card and the men marketed them. The idea caught on and the rest is history … and Hallmark.

What is the correct term for a resident of Concord? a) Concordite b) Concorded c) Concordian d) Hey-youse

A New Year’s Eve tradition in England and the Massachusetts Bay Colony included firing shots into the air. If you lived in Concord before 1752, on what day would you pick up your musket to participate in this tradition?

Name the drink! A beverage so special that Thomas Jefferson thought it would replace tea and coffee in America, and Little Women’s Jo March wondered if it was “the nectar drunk by the gods.” What is it?

8. They put a ban on Christmas. Unhappy with Christmas celebrations and its perceived pagan pageantry, the 1647 English Parliament said December 25th should be a day for fasting and humiliation to account for one’s sins. Inspired by this uplifting idea, the Massachusetts Bay Colony General Court implemented the ban in 1659 and made it a criminal offence to publicly celebrate Christmas. In Massachusetts, the ban was repealed in 1681. One hundred and seventy five years later, in 1856, Christmas officially became a state holiday. 9. March 24th. Unlike their European neighbors who used the Gregorian calendar, England and her Colonies (including Massachusetts) followed the Julian Calendar until 1752. New Year’s Eve was March 24th; New Year’s Day, March 25th.