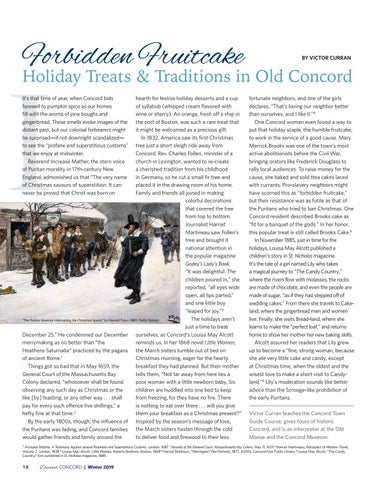 hearth for festive holiday desserts and a cup of syllabub (whipped cream flavored with wine or sherry). An orange, fresh off a ship in the port of Boston, was such a rare treat that it might be welcomed as a precious gift. In 1832, America saw its first Christmas tree just a short sleigh ride away from Concord. Rev. Charles Follen, minister of a church in Lexington, wanted to re-create a cherished tradition from his childhood in Germany, so he cut a small fir tree and placed it in the drawing room of his home. Family and friends all joined in making colorful decorations that covered the tree from top to bottom. Journalist Harriet Martineau saw Follen’s tree and brought it national attention in the popular magazine Godey’s Lady’s Book. “It was delightful. The children poured in,” she reported, “all eyes wide open, all lips parted,” and one little boy “leaped for joy.”3 The holidays aren’t “The Puritan Governor interrupting the Christmas Sports,” by Howard Pyle c. 1883. Public Domain just a time to treat December 25.” He condemned our December ourselves, as Concord’s Louisa May Alcott merrymaking as no better than “the reminds us. In her 1868 novel Little Women, Heathens Saturnalia” practiced by the pagans the March sisters tumble out of bed on of ancient Rome.1 Christmas morning, eager for the hearty breakfast they had planned. But their mother Things got so bad that in May 1659, the tells them, “Not far away from here lies a General Court of the Massachusetts Bay poor woman with a little newborn baby. Six Colony declared, “whosoever shall be found children are huddled into one bed to keep observing any such day as Christmas or the from freezing, for they have no fire. There like [by] feasting, or any other way . . . shall is nothing to eat over there . . . will you give pay for every such offence five shillings,” a them your breakfast as a Christmas present?” hefty fine at that time.2 By the early 1800s, though, the influence of Inspired by the season’s message of love, the Puritans was fading, and Concord families the March sisters hasten through the cold to deliver food and firewood to their less would gather friends and family around the It’s that time of year, when Concord bids farewell to pumpkin spice as our homes fill with the aroma of pine boughs and gingerbread. These smells evoke images of the distant past, but our colonial forbearers might be surprised—if not downright scandalized— to see the “profane and superstitious customs” that we enjoy at midwinter. Reverend Increase Mather, the stern voice of Puritan morality in 17th-century New England, admonished us that “The very name of Christmas savours of superstition. It can never be proved that Christ was born on

fortunate neighbors, and one of the girls declares, “That’s loving our neighbor better than ourselves, and I like it.”4 One Concord woman even found a way to put that holiday staple, the humble fruitcake, to work in the service of a good cause. Mary Merrick Brooks was one of the town’s most active abolitionists before the Civil War, bringing orators like Frederick Douglass to rally local audiences. To raise money for the cause, she baked and sold ttea cakes laced with currants. Pro-slavery neighbors might have scorned this as “forbidden fruitcake,” but their resistance was as futile as that of the Puritans who tried to ban Christmas. One Concord resident described Brooks cake as “fit for a banquet of the gods.” In her honor, this popular treat is still called Brooks Cake.5 In November 1885, just in time for the holidays, Louisa May Alcott published a children’s story in St. Nicholas magazine. It’s the tale of a girl named Lily who takes a magical journey to “The Candy Country,” where the rivers flow with molasses, the rocks are made of chocolate, and even the people are made of sugar, “as if they had stepped off of wedding cakes.” From there she travels to Cakeland, where the gingerbread men and women live. Finally, she visits Bread-land, where she learns to make the “perfect loaf,” and returns home to show her mother her new baking skills. Alcott assured her readers that Lily grew up to become a “fine, strong woman, because she ate very little cake and candy, except at Christmas time, when the oldest and the wisest love to make a short visit to Candyland.”6 Lily’s moderation sounds like better advice than the Scrooge-like prohibition of the early Puritans. ————————————————————————— Victor Curran teaches the Concord Town Guide Course, gives tours of historic Concord, and is an interpreter at the Old Manse and the Concord Museum.