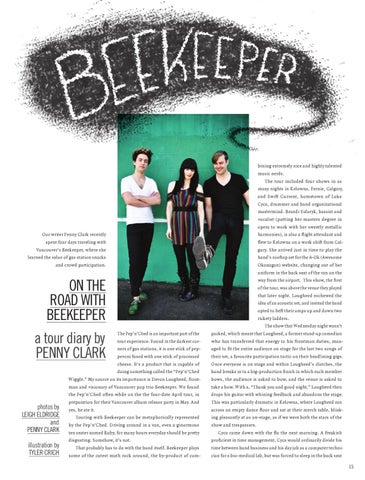 On the road with beekeeper a tour diary by Penny Clark

The Pep’n’Ched is an important part of the tour experience. Found in the darkest corners of gas stations, it is one stick of pepperoni fused with one stick of processed cheese. It’s a product that is capable of doing something called the “Pep’n’Ched Wiggle.” My source on its importance is Devon Lougheed, frontman and visionary of Vancouver pop trio Beekeeper. We found the Pep’n’Ched often while on the the four-date April tour, in preparation for their Vancouver album release party in May. And yes, he ate it. Touring with Beekeeper can be metaphorically represented by the Pep’n’Ched. Driving around in a van, even a ginormous ten seater named Ruby, for many hours everyday should be pretty disgusting. Somehow, it’s not. That probably has to do with the band itself. Beekeeper plays some of the cutest math rock around, the by-product of com-

bining extremely nice and highly talented music nerds. The tour included four shows in as many nights in Kelowna, Fernie, Calgary, and Swift Current, hometown of Luke Cyca, drummer and band organizational mastermind. Brandi Sidoryk, bassist and vocalist (putting her masters degree in opera to work with her sweetly metallic harmonies), is also a flight attendant and flew to Kelowna on a work shift from Calgary. She arrived just in time to play the band’s rooftop set for the A-Ok (Awesome Okanagan) website, changing out of her uniform in the back seat of the van on the way from the airport. This show, the first of the tour, was above the venue they played that later night. Lougheed eschewed the idea of an acoustic set, and instead the band opted to heft their amps up and down two rickety ladders. The show that Wednesday night wasn’t packed, which meant that Lougheed, a former stand-up comedian who has transferred that energy to his frontman duties, managed to fit the entire audience on stage for the last two songs of their set, a favourite participation tactic on their headlining gigs. Once everyone is on stage and within Lougheed’s clutches, the band breaks in to a big-production finish in which each member bows, the audience is asked to bow, and the venue is asked to take a bow. With a, “Thank you and good night,” Lougheed then drops his guitar with whining feedback and abandons the stage. This was particularly dramatic in Kelowna, where Lougheed ran across an empty dance floor and sat at their merch table, blinking pleasantly at us on-stage, as if we were both the stars of the show and trespassers. Cyca came down with the flu the next morning. A freakish proficient in time management, Cyca would ordinarily divide his time between band business and his day job as a computer technician for a bio-medical lab, but was forced to sleep in the back seat 15

Discorder Magazine kicks off another beautiful Vancouver summer with the Summer Festival Preview, Needles//Pins, Young Pacific, Capitol 6, and Beekeeper. And keep an eye out for art by Jeffry Lee! Also, in this month's On The Air, we talk to the hosts of Trancendance. Read on as you sip that cool drink and let the summer seep in! 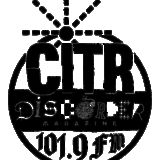