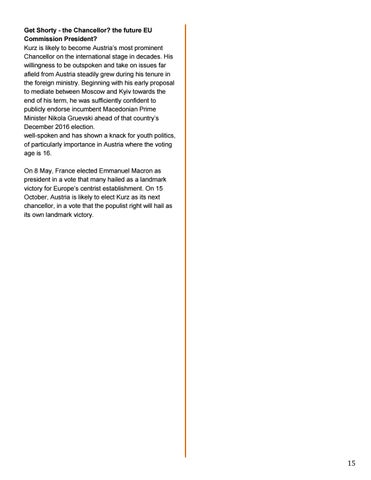 Get Shorty - the Chancellor? the future EU Commission President? Kurz is likely to become Austriaâ&#x20AC;&#x2122;s most prominent Chancellor on the international stage in decades. His willingness to be outspoken and take on issues far afield from Austria steadily grew during his tenure in the foreign ministry. Beginning with his early proposal to mediate between Moscow and Kyiv towards the end of his term, he was sufficiently confident to publicly endorse incumbent Macedonian Prime Minister Nikola Gruevski ahead of that countryâ&#x20AC;&#x2122;s December 2016 election. well-spoken and has shown a knack for youth politics, of particularly importance in Austria where the voting age is 16. On 8 May, France elected Emmanuel Macron as president in a vote that many hailed as a landmark victory for Europeâ&#x20AC;&#x2122;s centrist establishment. On 15 October, Austria is likely to elect Kurz as its next chancellor, in a vote that the populist right will hail as its own landmark victory. 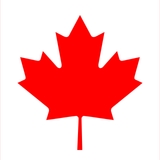 Chief Publisher Eugene Matos de Lara, with Dr Maite bring in interesting nuances in the field of history and diplomacy.

Chief Publisher Eugene Matos de Lara, with Dr Maite bring in interesting nuances in the field of history and diplomacy.