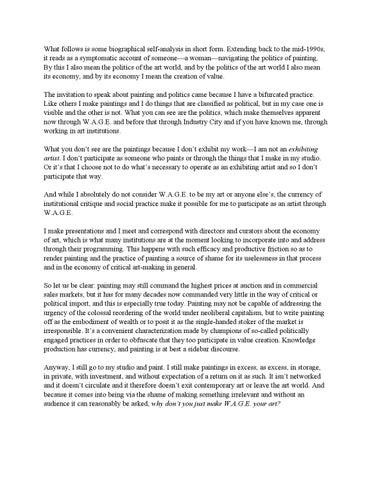 What follows is some biographical self-analysis in short form. Extending back to the mid-1990s, it reads as a symptomatic account of someone—a woman—navigating the politics of painting. By this I also mean the politics of the art world, and by the politics of the art world I also mean its economy, and by its economy I mean the creation of value. The invitation to speak about painting and politics came because I have a bifurcated practice. Like others I make paintings and I do things that are classified as political, but in my case one is visible and the other is not. What you can see are the politics, which make themselves apparent now through W.A.G.E. and before that through Industry City and if you have known me, through working in art institutions. What you don’t see are the paintings because I don’t exhibit my work—I am not an exhibiting artist. I don’t participate as someone who paints or through the things that I make in my studio. Or it’s that I choose not to do what’s necessary to operate as an exhibiting artist and so I don’t participate that way. And while I absolutely do not consider W.A.G.E. to be my art or anyone else’s, the currency of institutional critique and social practice make it possible for me to participate as an artist through W.A.G.E. I make presentations and I meet and correspond with directors and curators about the economy of art, which is what many institutions are at the moment looking to incorporate into and address through their programming. This happens with such efficacy and productive friction so as to render painting and the practice of painting a source of shame for its uselessness in that process and in the economy of critical art-making in general. So let us be clear: painting may still command the highest prices at auction and in commercial sales markets, but it has for many decades now commanded very little in the way of critical or political import, and this is especially true today. Painting may not be capable of addressing the urgency of the colossal reordering of the world under neoliberal capitalism, but to write painting off as the embodiment of wealth or to posit it as the single-handed stoker of the market is irresponsible. It’s a convenient characterization made by champions of so-called politically engaged practices in order to obfuscate that they too participate in value creation. Knowledge production has currency, and painting is at best a sidebar discourse. Anyway, I still go to my studio and paint. I still make paintings in excess, as excess, in storage, in private, with investment, and without expectation of a return on it as such. It isn’t networked and it doesn’t circulate and it therefore doesn’t exit contemporary art or leave the art world. And because it comes into being via the shame of making something irrelevant and without an audience it can reasonably be asked, why don’t you just make W.A.G.E. your art?

And so, in response to my friend and colleague, a male curator, who asked me that question, I’m going to briefly try and explain why not and how my politics came to find themselves via the shame of painting’s failure, and the gendered nature of that shame. The biography part of this begins in the place that most artists’ engagement with the politics of community begins: in art school. For me this was in Vancouver in the early 1990’s. Emily Carr College of Art &amp; Design, a low rent education with no formal instruction and no required critical reading beyond Art in Theory 1900-1990. This meant that we learned by implication. Painting was dead—this was explicit, and by implication if made by women was borderline unethical, indicted somewhere between the crisis of representation and identity politics, and then skewered by post-structuralism and appropriation. Not explicit but unmistakably clear was that If you wanted to plug yourself into a conduit of any influence in Vancouver, if you wanted to participate in a discourse that wasn’t regional, being an exhibiting artist there meant making things that Jeff Wall might like. To that end, justifying not even painting’s relevance, but painting’s existence, period, was the starting point. And so began many years of thinking painting through the image grammar of contemporary media such as film, advertising, graphic illustration etc., and avoiding paint brushes, drawing, or anything that would indicate the presence of a subjectivity. I had two solo exhibitions after undergrad and then moved to New York in 1998 and had two more. They were neither successful nor unsuccessful; they were a beginning. But there seemed to be something hollow in their execution—I was making exhibitions, not paintings. Had I been able to do this with the kind of irony that was in ascension in the early 2000s this might have been a comfortable and even profitable position for me. But I couldn’t and instead I decided to withdraw from trying to have exhibitions and then inadvertently worked in isolation for five years between 2001 and 2006. The through line during this period is the attempt to construct a subjectivity, one informed by a sense that such a constitution isn’t really possible and is therefore always in jeopardy and perpetually failing. This takes place in the context of an artist community and a city changing radically in composition and character under the unprecedented dominance of commerce gaining deep traction after 9/11. At the same pace I became increasingly disaffected and disenchanted, and instead of re-entering as an artist I found myself participating by critically engaging with the art institutions and people I worked for—a kind of embodied institutional critique that resulted in being fired three times. Privately in the studio I was unable to make painting participate, to make it relevant, or to articulate an authentic subjectivity, despite the fact that I didn’t even believe in such a thing, and my non-participation had become more of a form of resistance. My paintings were somehow

getting dumber and more flippant, while my politics were getting riskier and more tactical, and I think this was when the shame of painting transmuted itself into a politics. I would say now, that the paintings and choices I made that led to this transmutation were unconsciously gendered. Internalizing failure is typically an assignment for women and in this case, my willful failure to participate as an exhibiting artist on the terms required of me—my perceived failure to be or to be like the male artists I learned through and appealed to through my work, occurred without a feminist consciousness. Without an understanding at the time of this most basic mechanism, my perceived lack of success at making painting perform as a political actor and to place this agency in the public view of my peers did not seem to have anything to do with painting’s inherent limitations, or how those limitations are further conditioned by gender. Instead, what seemed like my own failure, what I can only describe as the private simple kind of shame that has no audience—perhaps the kind of fully internalized shame particular to women— became a fault line and then an active schism between two distinct practices: painting and politics. The shame of painting’s failure turned in on itself, but it recapitulated as a motivation to act, launching directly out and back into the problem with the force of its repression. So, the question: why don’t I just make W.A.G.E. my art? As someone who now has the beginnings of a feminist consciousness I can say that this question implies several things. It implies that efficacy equals success and that participation means having a public career. It implies that I should desire to have a public career and do so on the terms established by those who had and still have the power to determine whether I have a career or not; and that I must want what they have. And finally therefore, this question implies that nothing much has changed since Vancouver in the mid-90s. A text by Lise Soskolne, written for “Painting-Politics”, a panel discussion at New York University on March 7, 2014.