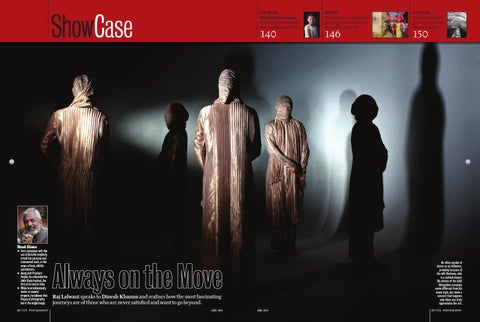 David Zimmerman On his decision to take the road less travelled

Our selection of the best photos published in the mainstream media

A look at the best photographs sent by our readers

• He is synonyous with the use of pictorial simplicity in both his personal and commercial work, in the areas of food, still life and interiors. • Along with Prashant Panjiar, he cofounded the Delhi Photo Festival, the first of its kind in India. • While he simultaneously works on several projects, he believes that the joy of photography lies in the single image. B E T T E R P H O T O G R A P H Y

He often speaks of dance as an influence, probably because of his wife Rachana, who is a kathak dancer. His photos of the Aditi Mangaldas company seem different from his usual style, but show a connect that happens only when one truly appreciates the art.

Raj Lalwani speaks to Dinesh Khanna and realises how the most fascinating journeys are of those who are never satisfied and want to go beyond. JUNE 2014

This off-the-cuff moment between Nanika and Ria is a part of the Mothers and Daughters work. The simplicity and intimacy in these images is what makes them worth treasuring.

GADGETS &amp; GEAR • In the early years, he loved using transparency film as the colour rendition was in tune with his preferred vision. • Today, he does not mind what equipment he is using—be it his DSLR, compact camera or even an iPhone (which is often his preferred camera, especially from the point of view of notetaking).

Mothers and Daughters is what he calls a ‘lifelong’ project. As seen in this photograph of a lady called Kalpana with her daughters, the project mixes the much forgotten formality of the family portrait with spontaneity.

inesh Khanna’s career path veered from being a calculator salesman, a garment quality checker, a busboy in a New York bar and a client servicing executive, after which, he finally gave in to his desire to make images. It was a homecoming, of sorts. His father was a photographer as well. “But that was precisely the reason why I did not want to

make it my profession. India is a casteist society. A cobbler’s son becomes a cobbler, a tailor’s son becomes a tailor. Not for a moment was there a doubt for my love for photography, but I did not want to be like one of the dynastic politicians of today.”

The Need to Wear Several Hats The winding road that his initial career took is mirrored in his photographic path.

From images that explore the emotionality of colour to traditional old-world portraits, his photographic ideas are streams that coexist and flow at the same time, driven by the issues that he feels strongly for. One thing he does feel strongly for is the interdependence of personal and commercial work. “The personal work is where your vision, your identity, your feelings come through. But assignments help you instill discipline.” He adds,

“Photography is a solitary pursuit, but while on assignment, a photographer learns how to work in a team. It’s the closest that still photography can get to filmmaking.”

Dialogues, Online and Otherwise Dinesh’s sociopolitical interest is as transparent on his Facebook Timeline, as it is in his photographs. His photos of chairs in a work titled Kissa Kursi Ka may seem mundane at first glance, but see them over

Stories have always played a big role in his images. Rajendra Yadav, one of the pillars of the Hindi literary world, was the man who ran Hans magazine for several years, and also Dinesh’s father-in-law. This portrait of his was a part of the Unsung-2 project.

“An image should not be an end in itself. Every image is a process to the larger goal of sharpening your vision.” JUNE 2014

PR OFI LE With his cellphone work, he often has several sub-projects that are going on, those that reflect his immediate routine and life. TIPS BY DINESH • Riyaaz is most important, especially today, since it is ‘easy’ to make a pleasing picture. • While you keep doing riyaaz and nichod, be open to inspirations from your life and other arts. Often, photography is not just about the photography.

138 A lot of Dinesh’s personal work addresses urban issues and reflects his personal feelings and thoughts on life and ‘development’ in a large city.

time and you will recognise the layers, the symbolism and the critical comment on power and politics. Facebook is like his drawing board, really. It’s refreshing to see a photographer who shares his images on social media, not for self promotion, but to start a conversation. Dinesh may be in fifties, but he is probably as old as his teenage daughters, in thought, deed and curiosity.

A Sensitive Recognition of Colour Maybe that is why he is always on the move for something new. He used Facebook as a means to mentor young photographers, well before Twitter and Instagram even existed. An early adopter of digital, he was also probably the first Indian pro to embrace the cameraphone. His early work was shockingly rich in colour and explored simple subjects

journey, but even when he tweaks his style, there is always a certain quietude, an approach that is observant, reflective but still asks questions. Much like him as a person.

With his phone, his images show an instinct towards colour, shape and form, much like a lot of his early work.

His affinity for cellphone photography is probably an extension of his love for documenting his travels with the simplest gear possible.

“Sometimes, as photographers, we get a little too judgemental about the medium. The joy of making the image should come first.” BETTER PHOTOGRAPHY

like doors and windows. Those kind of photos, in today’s day and age, he says, are “mediocre, cliché and done with.” But in the early ‘90s, he was one of the first practitioners in India who was using colour, not to photograph people, but to capture close-up and detail that isolated quiet scenes from otherwise chaotic environs. The great Prabuddha Dasgupta had written of these images, saying that they reveal to us “a universe of elegance and composed order, that our world weary eyes often miss.” An instinctive affinity towards colour has largely defined Dinesh Khanna’s

“Information is important, as are aesthetics,” he says, “but what’s most important is the feeling that you wish to convey.”

Profile published in Better Photography magazine issue of May 2014. 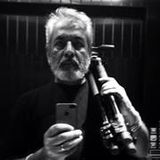