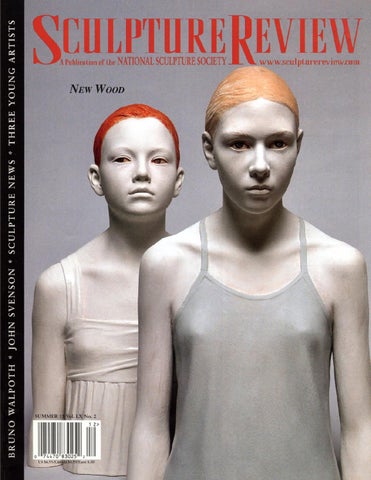 rtisei - St. Ulrich, Italy, is one of three villages in the

and the birthplace of the region’s woodcarving identity and

Val Gardena, a region known for four centuries of

unbroken tradition in woodcarving, from simple

as his life’s work. Early childhood observations of the art

wooden toys to the most elaborate Catholic Church

and craft of wood sculpture in the studios of his grand-

a passionate involvement in wood sculpture that Walpoth

sculpture flourished after the Second World War. The

has stoked with education, practice, and an evolving vi-

sion that honors tradition while infusing his works with

modern sculptures within the tradition of meticulous

while exploring deeply human themes from a wholly con-

for innovative ideation and mastery.

thing but “wooden” in the utter aliveness of their forms,

Born in Bressanone-Brixen, the oldest city in South Tyrol

her speak for herself. “I would rather not add words to a finished sculpture. Any effect it has on the observer is for that observer to experience independently of commentary from me.” Walpoth’s figures frequently have a downward gaze, as though deep in thought. The figure makes no eye contact, but never suggests anything less than someone fully alive, aware, and engaged with the present, the surroundings, and the observer. In Sempre più lontano (Still Farther), Walpoth presents a young boy whose arms are outstretched at his sides. His eyes are closed, inviting viewers into the vastness of a child’s imagination, where nothing is impossible. Textural markings around the boy’s eyelids invite viewer speculation about their many possible meanings. Occasionally sculpting in oil-based clay for small editions of six to eight bronzes, Walpoth always returns to his love of wood. “I find bronze foundries very interesting, but not quite suitable for the way I work and for achieving the results I want. I can better implement my sensitivity to form and my feelings in wood.

Encouraged by master carvers in his family, then by a teacher who recognized and nurtured his exceptional aptitude and focus, Walpoth began a five-year apprenticeship to Vicenzo Mussner, a master carver in Ortisei - St.Ulrich, at the age of fourteen. At nineteen, he began a six-year course of study with Hans Ladner at the Akademie der Bildenden Künste in Munich, Germany. Walpoth* cites these years as crucial in his career. “In Italy there was substantial, though not well-known, wood sculpture in the late Gothic and in the early Renaissance,” says Walpoth. “I believe that my work carries some of this influence in itself. Over the years, I have been influenced by many artists, not just wood carvers. The serenity and clarity in early Renaissance painter Piero della Francesca’s posed figures influences me to this day. Among contemporary artists, I greatly admire the works of British sculptor, Antony Gormley, as well as the busts of Japanese sculptor Katsura Funakoshi. I am also fascinated by the photographs of [the] American photographer, Jock Sturges. I have been inspired by his work for some time.” Standing 5 feet, 7 inches tall, Walpoth’s hand-carved linden wood sculpture, Roos (Rose), has the serenity of a della Francesca portrait, the material surprise of a Gormley sculpture, the calm of a Funakoshi, and the confident dignity of a Sturges model. It also has the full originality of Bruno Walpoth’s vision and hand, in its expressiveness of face and gesture, contemporary dress, and Walpoth’s signature use of semitranslucent paint to color the wood without concealing the organic grain of the linden or its living softness. As to anything Roos has to say, Walpoth prefers to let 26

Photos: Courtesy of the artist.

I would rather avoid the uncertainties of being dependent on others for the finished work. Of course with the right foundry, bronze is good when one wants more than one piece.” His preference for wood begins with its working properties and extends to the ultimate aesthetics of the finished works. “Wood is a natural material. It feels good. It smells good. It can be designed in so many ways, especially in regard to processing and finishing its surfaces. It requires knowledge of the grain that can only be acquired through years of direct experience. As to the influence of wood on my thinking or any message it conveys [in] the sculptures, I cannot make that judgment at this point. Wood is a matter of course in my work, like the air we breathe. I don’t think about it. The vitality of wood as an organic material is a given. The charm and challenge is to keep it alive through a skillful handling of the surface” Janluca is a 25-inch tall wood carving of a boy with red hair and strong symmetrical features. Walpoth made this powerful piece into an edition of five exemplars, each entirely hand carved of wood. With this and only two other sculptures has Walpoth explored the same subject more than once: Camminando solo (Walking Alone) was an edition of three iterations of the same subject, each unique in composition and entirely hand carved. “These were experiments in working on the same idea with different types of wood and devising different surface treatments.” Walpoth also revisited a sculpture called It Was Not Me four more times and gave each a new name, reflecting the differences resulting from the use of different woods and surface treatments. In all his work, the majority of which is in the basswood he favors, Walpoth follows a similar course of action. “I use a motorized saw to indicate and carve the larger forms and

volumes in sculptures. I continue elaborating with carving tools. Then I use different files or rasps to refine details. I treat the final surface with white acrylic paint, which I apply in several coats, each of which I revise.” Walpoth also uses color in certain instances, sparingly, and in ways that delineate character and personality that add to the emotional impact of the sculpture. Occasionally, Walpoth employs an overlay of lead, sometimes covering only a portion of the wood sculpture, other times as a complete surface finish. “Lead fascinates me simply for its color and aesthetically pleasing surface. I wanted to experiment with lead about two years ago, and have used it on several pieces since. The hammered lead foil acts as a protective covering for the slightly vulnerable subjects.” Nel pensiero (In Thought) depicts a man’s head, immersed in some kind of reverie, tilted, silent, protected completely by the hammered lead overlay and suggestive of the magical state just before slumber. In L’Argentino (The Argentine), Walpoth presents the head and upper body of an adult. Physical characteristics and a pensively downcast gaze suggest vulnerability, which the artist has countered with a lead overlay from the base to the neckline. Walpoth addresses purely aesthetic impulses in the viewer even as he provokes emotional response with the intentional vagueness of the dreamlike state in which he reveals the Argentine. Val Gardena, with its three famous woodcarving towns and four centuries of tradition, cannot help but influence the artists who live there. Walpoth’s training and appreciation of his artistic heritage work in concert with his contemporary sensibilities and original ideas—giving the people he creates in wood affecting relevance, immediacy, and presence. “My subjects are people because I am interested in the human in all aspects. For my characters, it is not just physical aesthetics, but rather expression. When standing before the works, one should have the impression the characters have a soul. That is what I want to achieve.”

Wolfgang Mabry is a freelance writer who has written more than 125 articles for publication about art, artists, and the business of art. He has directed galleries in Carmel and Laguna Beach, California, and Santa Fe, New Mexico, where he now works as sales manager at a gallery on Canyon Road.