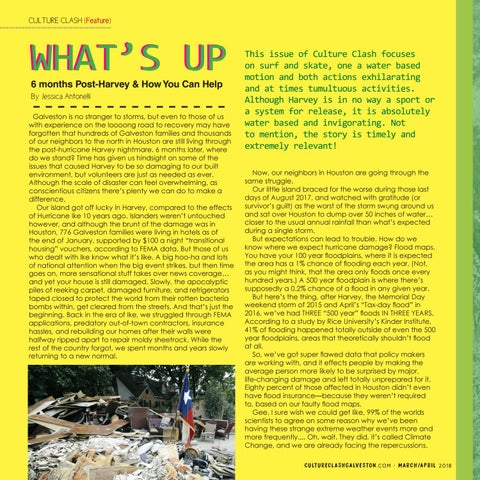 WHAT’S UP 6 months Post-Harvey & How You Can Help By Jessica Antonelli Galveston is no stranger to storms, but even to those of us with experience on the loooong road to recovery may have forgotten that hundreds of Galveston families and thousands of our neighbors to the north in Houston are still living through the post-hurricane Harvey nightmare. 6 months later, where do we stand? Time has given us hindsight on some of the issues that caused Harvey to be so damaging to our built environment, but volunteers are just as needed as ever. Although the scale of disaster can feel overwhelming, as conscientious citizens there’s plenty we can do to make a difference. Our island got off lucky in Harvey, compared to the effects of Hurricane Ike 10 years ago. Islanders weren’t untouched however, and although the brunt of the damage was in Houston, 776 Galveston families were living in hotels as of the end of January, supported by $100 a night “transitional housing” vouchers, according to FEMA data. But those of us who dealt with Ike know what it’s like. A big hoo-ha and lots of national attention when the big event strikes, but then time goes on, more sensational stuff takes over news coverage… and yet your house is still damaged. Slowly, the apocalyptic piles of reeking carpet, damaged furniture, and refrigerators taped closed to protect the world from their rotten bacteria bombs within, get cleared from the streets. And that’s just the beginning. Back in the era of Ike, we struggled through FEMA applications, predatory out-of-town contractors, insurance hassles, and rebuilding our homes after their walls were halfway ripped apart to repair moldy sheetrock. While the rest of the country forgot, we spent months and years slowly returning to a new normal.

This issue of Culture Clash focuses on surf and skate, one a water based motion and both actions exhilarating and at times tumultuous activities. Although Harvey is in no way a sport or a system for release, it is absolutely water based and invigorating. Not to mention, the story is timely and extremely relevant! Now, our neighbors in Houston are going through the same struggle. Our little island braced for the worse during those last days of August 2017, and watched with gratitude (or survivor’s guilt) as the worst of the storm swung around us and sat over Houston to dump over 50 inches of water… closer to the usual annual rainfall than what’s expected during a single storm. But expectations can lead to trouble. How do we know where we expect hurricane damage? Flood maps. You have your 100 year ﬂoodplains, where it is expected the area has a 1% chance of ﬂooding each year. (Not, as you might think, that the area only ﬂoods once every hundred years.) A 500 year ﬂoodplain is where there’s supposedly a 0.2% chance of a ﬂood in any given year. But here’s the thing, after Harvey, the Memorial Day weekend storm of 2015 and April’s “Tax-day ﬂood” in 2016, we’ve had THREE “500 year” ﬂoods IN THREE YEARS. According to a study by Rice University’s Kinder Institute, 41% of ﬂooding happened totally outside of even the 500 year ﬂoodplains, areas that theoretically shouldn’t ﬂood at all. So, we’ve got super ﬂawed data that policy makers are working with, and it effects people by making the average person more likely to be surprised by major, life-changing damage and left totally unprepared for it. Eighty percent of those affected in Houston didn’t even have ﬂood insurance—because they weren’t required to, based on our faulty ﬂood maps. Gee. I sure wish we could get like, 99% of the worlds scientists to agree on some reason why we’ve been having these strange extreme weather events more and more frequently.... Oh, wait. They did, it’s called Climate Change, and we are already facing the repercussions. C U LTU R EC L A S H G A LV E STO N . C O M • M A R C H /A P R I L 2 0 1 8