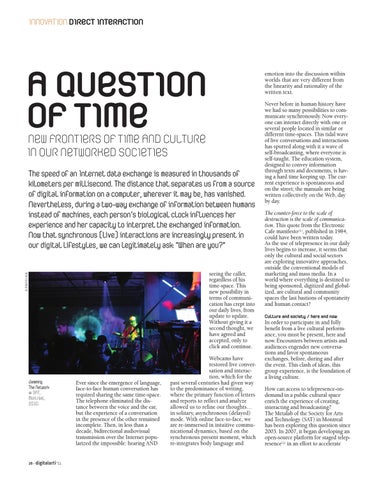 emotion into the discussion within worlds that are very different from the linearity and rationality of the written text.

A QUESTION OF TIME NEW FRONTIERS OF TIME AND CULTURE IN OUR NETWORKED SOCIETIES The speed of an Internet data exchange is measured in thousands of kilometers per millisecond. The distance that separates us from a source of digital information on a computer, wherever it may be, has vanished. Nevertheless, during a two-way exchange of information between humans instead of machines, each person’s biological clock influences her experience and her capacity to interpret the exchanged information. Now that synchronous (live) interactions are increasingly present in our digital lifestyles, we can legitimately ask: &quot;When are you?&quot; © PHOTO R.R.

seeing the caller, regardless of his time-space. This new possibility in terms of communication has crept into our daily lives, from update to update. Without giving it a second thought, we have agreed and accepted, only to click and continue.

Ever since the emergence of language, face-to-face human conversation has required sharing the same time-space. The telephone eliminated the distance between the voice and the ear, but the experience of a conversation in the presence of the other remained incomplete. Then, in less than a decade, bidirectional audiovisual transmission over the Internet popularized the impossible: hearing AND

Webcams have restored live conversation and interaction, which for the past several centuries had given way to the predominance of writing, where the primary function of letters and reports to reflect and analyze allowed us to refine our thoughts… in solitary, asynchronous (delayed) mode. With online face-to-face, we are re-immersed in intuitive communicational dynamics, based on the synchronous present moment, which re-integrates body language and

Never before in human history have we had so many possibilities to communicate synchronously. Now everyone can interact directly with one or several people located in similar or different time-spaces. This tidal wave of live conversations and interactions has spurred along with it a wave of self-broadcasting, where everyone is self-taught. The education system, designed to convey information through texts and documents, is having a hard time keeping up. The current experience is spontaneous and on the street; the manuals are being written collectively on the Web, day by day. The counter-force to the scale of destruction is the scale of communication. This quote from the Electronic Cafe manifesto(1), published in 1984, could have been written today. As the use of telepresence in our daily lives begins to increase, it seems that only the cultural and social sectors are exploring innovative approaches, outside the conventional models of marketing and mass media. In a world where everything is destined to being sponsored, digitized and globalized, are cultural and community spaces the last bastions of spontaneity and human contact?

Culture and society / here and now In order to participate in and fully benefit from a live cultural performance, you must be present, here and now. Encounters between artists and audiences engender new conversations and favor spontaneous exchanges, before, during and after the event. This clash of ideas, this group experience, is the foundation of a living culture. How can access to telepresence-ondemand in a public cultural space enrich the experience of creating, interacting and broadcasting? The Metalab of the Society for Arts and Technology (SAT) in Montreal has been exploring this question since 2003. In 2007, it began developing an open-source platform for staged telepresence(2) in an effort to accelerate 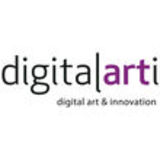