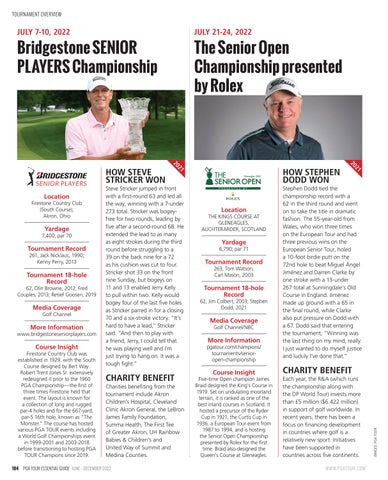 Firestone Country Club was established in 1929, with the South Course designed by Bert Way. Robert Trent Jones Sr. extensively redesigned it prior to the 1960 PGA Championship—the first of three times Firestone held that event. The layout is known for a collection of long and rugged par-4 holes and for the 667-yard, par-5 16th hole, known as “The Monster.” The course has hosted various PGA TOUR events including a World Golf Championships event in 1999-2001 and 2003-2018 before transitioning to hosting PGA TOUR Champions since 2019. 184

Steve Stricker jumped in front with a first-round 63 and led all the way, winning with a 7-under 273 total. Stricker was bogeyfree for two rounds, leading by five after a second-round 68. He extended the lead to as many as eight strokes during the third round before struggling to a 39 on the back nine for a 72 as his cushion was cut to four. Stricker shot 33 on the front nine Sunday, but bogeys on 11 and 13 enabled Jerry Kelly to pull within two. Kelly would bogey four of the last five holes as Stricker parred in for a closing 70 and a six-stroke victory. “It’s hard to have a lead,” Stricker said. “And then to play with a friend, Jerry, I could tell that he was playing well and I’m just trying to hang on. It was a tough fight.”

Five-time Open champion James Braid designed the King’s Course in 1919. Set on undulating moorland terrain, it is ranked as one of the best inland courses in Scotland. It hosted a precursor of the Ryder Cup in 1921, the Curtis Cup in 1936, a European Tour event from 1987 to 1994, and is hosting the Senior Open Championship presented by Rolex for the first time. Braid also designed the Queen’s Course at Gleneagles.

Stephen Dodd tied the championship record with a 62 in the third round and went on to take the title in dramatic fashion. The 55-year-old from Wales, who won three times on the European Tour and had three previous wins on the European Senior Tour, holed a 10-foot birdie putt on the 72nd hole to beat Miguel Ángel Jiménez and Darren Clarke by one stroke with a 13-under 267 total at Sunningdale’s Old Course in England. Jiménez made up ground with a 65 in the final round, while Clarke also put pressure on Dodd with a 67. Dodd said that entering the tournament, “Winning was the last thing on my mind, really. I just wanted to do myself justice and luckily I’ve done that.”

CHARITY BENEFIT Each year, the R&amp;A (which runs the championship along with the DP World Tour) invests more than £5 million ($6.422 million) in support of golf worldwide. In recent years, there has been a focus on financing development in countries where golf is a relatively new sport. Initiatives have been supported in countries across five continents.