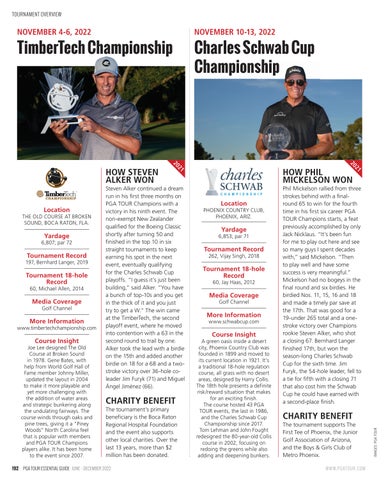 Joe Lee designed The Old Course at Broken Sound in 1978. Gene Bates, with help from World Golf Hall of Fame member Johnny Miller, updated the layout in 2004 to make it more playable and yet more challenging with the addition of water areas and strategic bunkering along the undulating fairways. The course winds through oaks and pine trees, giving it a “Piney Woods” North Carolina feel that is popular with members and PGA TOUR Champions players alike. It has been home to the event since 2007. 192

Steven Alker continued a dream run in his first three months on PGA TOUR Champions with a victory in his ninth event. The non-exempt New Zealander qualified for the Boeing Classic shortly after turning 50 and finished in the top 10 in six straight tournaments to keep earning his spot in the next event, eventually qualifying for the Charles Schwab Cup playoffs. “I guess it’s just been building,” said Alker. “You have a bunch of top-10s and you get in the thick of it and you just try to get a W.” The win came at the TimberTech, the second playoff event, where he moved into contention with a 63 in the second round to trail by one. Alker took the lead with a birdie on the 15th and added another birdie on 18 for a 68 and a twostroke victory over 36-hole coleader Jim Furyk (71) and Miguel Ángel Jiménez (66).

CHARITY BENEFIT The tournament’s primary beneficiary is the Boca Raton Regional Hospital Foundation and the event also supports other local charities. Over the last 13 years, more than $2 million has been donated.

A green oasis inside a desert city, Phoenix Country Club was founded in 1899 and moved to its current location in 1921. It’s a traditional 18-hole regulation course, all grass with no desert areas, designed by Harry Collis. The 18th hole presents a definite risk/reward situation that makes for an exciting finish. The course hosted 43 PGA TOUR events, the last in 1986, and the Charles Schwab Cup Championship since 2017. Tom Lehman and John Fought redesigned the 80-year-old Collis course in 2002, focusing on redoing the greens while also adding and deepening bunkers.

Phil Mickelson rallied from three strokes behind with a finalround 65 to win for the fourth time in his first six career PGA TOUR Champions starts, a feat previously accomplished by only Jack Nicklaus. “It’s been fun for me to play out here and see so many guys I spent decades with,” said Mickelson. “Then to play well and have some success is very meaningful.” Mickelson had no bogeys in the final round and six birdies. He birdied Nos. 11, 15, 16 and 18 and made a timely par save at the 17th. That was good for a 19-under 265 total and a onestroke victory over Champions rookie Steven Alker, who shot a closing 67. Bernhard Langer finished 17th, but won the season-long Charles Schwab Cup for the sixth time. Jim Furyk, the 54-hole leader, fell to a tie for fifth with a closing 71 that also cost him the Schwab Cup he could have earned with a second-place finish.

CHARITY BENEFIT The tournament supports The First Tee of Phoenix, the Junior Golf Association of Arizona, and the Boys &amp; Girls Club of Metro Phoenix.