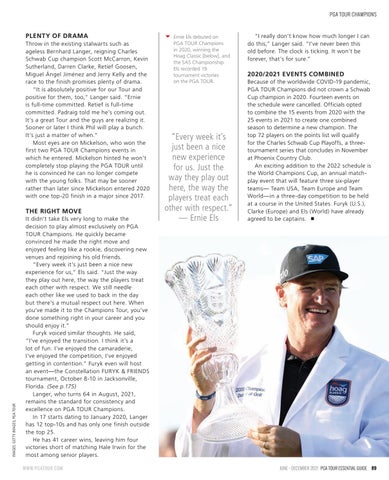 Plenty of drama Throw in the existing stalwarts such as ageless Bernhard Langer, reigning Charles Schwab Cup champion Scott McCarron, Kevin Sutherland, Darren Clarke, Retief Goosen, Miguel Ángel Jiménez and Jerry Kelly and the race to the finish promises plenty of drama. “It is absolutely positive for our Tour and positive for them, too,” Langer said. “Ernie is full-time committed. Retief is full-time committed. Padraig told me he’s coming out. It’s a great Tour and the guys are realizing it. Sooner or later I think Phil will play a bunch. It’s just a matter of when.” Most eyes are on Mickelson, who won the first two PGA TOUR Champions events in which he entered. Mickelson hinted he won’t completely stop playing the PGA TOUR until he is convinced he can no longer compete with the young folks. That may be sooner rather than later since Mickelson entered 2020 with one top-20 finish in a major since 2017.

The right move It didn’t take Els very long to make the decision to play almost exclusively on PGA TOUR Champions. He quickly became convinced he made the right move and enjoyed feeling like a rookie, discovering new venues and rejoining his old friends. “Every week it’s just been a nice new experience for us,” Els said. “Just the way they play out here, the way the players treat each other with respect. We still needle each other like we used to back in the day but there’s a mutual respect out here. When you’ve made it to the Champions Tour, you’ve done something right in your career and you should enjoy it.” Furyk voiced similar thoughts. He said, “I’ve enjoyed the transition. I think it’s a lot of fun. I’ve enjoyed the camaraderie, I’ve enjoyed the competition, I’ve enjoyed getting in contention.” Furyk even will host an event—the Constellation FURYK & FRIENDS tournament, October 8-10 in Jacksonville, Florida. (See p.175) Langer, who turns 64 in August, 2021, remains the standard for consistency and excellence on PGA TOUR Champions. In 17 starts dating to January 2020, Langer has 12 top-10s and has only one finish outside the top 25. He has 41 career wins, leaving him four victories short of matching Hale Irwin for the most among senior players. w w w.p gat our.com

bb Ernie Els debuted on PGA TOUR Champions in 2020, winning the Hoag Classic [below], and the SAS Championship. Els recorded 19 tournament victories on the PGA TOUR.

“Every week it’s just been a nice new experience for us. Just the way they play out here, the way the players treat each other with respect.” — Ernie Els

“I really don’t know how much longer I can do this,” Langer said. “I’ve never been this old before. The clock is ticking. It won’t be forever, that’s for sure.”

2020/2021 events combined Because of the worldwide COVID-19 pandemic, PGA TOUR Champions did not crown a Schwab Cup champion in 2020. Fourteen events on the schedule were cancelled. Officials opted to combine the 15 events from 2020 with the 25 events in 2021 to create one combined season to determine a new champion. The top 72 players on the points list will qualify for the Charles Schwab Cup Playoffs, a threetournament series that concludes in November at Phoenix Country Club. An exciting addition to the 2022 schedule is the World Champions Cup, an annual matchplay event that will feature three six-player teams— Team USA, Team Europe and Team World—in a three-day competition to be held at a course in the United States. Furyk (U.S.), Clarke (Europe) and Els (World) have already agreed to be captains. 