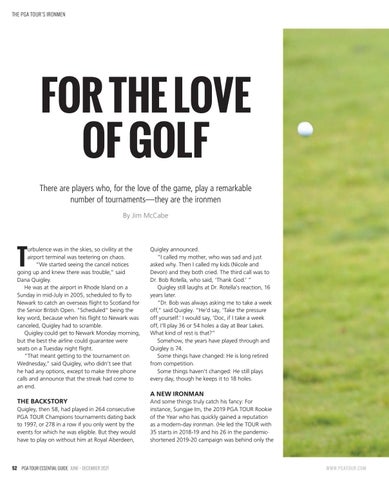 FOR THE LOVE OF GOLF There are players who, for the love of the game, play a remarkable number of tournaments—they are the ironmen By Jim McCabe

urbulence was in the skies, so civility at the airport terminal was teetering on chaos. “We started seeing the cancel notices going up and knew there was trouble,” said Dana Quigley. He was at the airport in Rhode Island on a Sunday in mid-July in 2005, scheduled to fly to Newark to catch an overseas flight to Scotland for the Senior British Open. “Scheduled” being the key word, because when his flight to Newark was canceled, Quigley had to scramble. Quigley could get to Newark Monday morning, but the best the airline could guarantee were seats on a Tuesday night flight. “That meant getting to the tournament on Wednesday,” said Quigley, who didn’t see that he had any options, except to make three phone calls and announce that the streak had come to an end.

Quigley announced. “I called my mother, who was sad and just asked why. Then I called my kids (Nicole and Devon) and they both cried. The third call was to Dr. Bob Rotella, who said, ‘Thank God.’ ” Quigley still laughs at Dr. Rotella’s reaction, 16 years later. “Dr. Bob was always asking me to take a week off,” said Quigley. “He’d say, ‘Take the pressure off yourself.’ I would say, ‘Doc, if I take a week off, I’ll play 36 or 54 holes a day at Bear Lakes. What kind of rest is that?” Somehow, the years have played through and Quigley is 74. Some things have changed: He is long retired from competition. Some things haven’t changed: He still plays every day, though he keeps it to 18 holes.

A new ironman The backstory Quigley, then 58, had played in 264 consecutive PGA TOUR Champions tournaments dating back to 1997, or 278 in a row if you only went by the events for which he was eligible. But they would have to play on without him at Royal Aberdeen,

And some things truly catch his fancy: For instance, Sungjae Im, the 2019 PGA TOUR Rookie of the Year who has quickly gained a reputation as a modern-day ironman. (He led the TOUR with 35 starts in 2018-19 and his 26 in the pandemicshortened 2019-20 campaign was behind only the