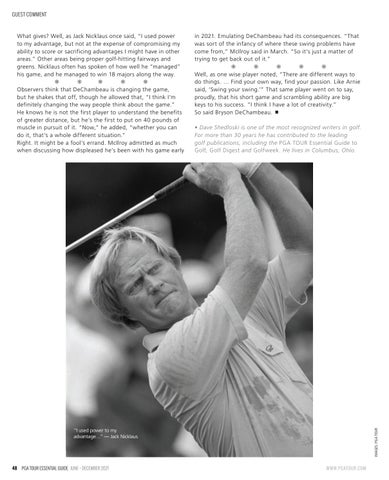 What gives? Well, as Jack Nicklaus once said, “I used power to my advantage, but not at the expense of compromising my ability to score or sacrificing advantages I might have in other areas.” Other areas being proper golf-hitting fairways and greens. Nicklaus often has spoken of how well he “managed” his game, and he managed to win 18 majors along the way. j j j j j Observers think that DeChambeau is changing the game, but he shakes that off, though he allowed that, “I think I’m definitely changing the way people think about the game.” He knows he is not the first player to understand the benefits of greater distance, but he’s the first to put on 40 pounds of muscle in pursuit of it. “Now,” he added, “whether you can do it, that’s a whole different situation.” Right. It might be a fool’s errand. McIlroy admitted as much when discussing how displeased he’s been with his game early

in 2021. Emulating DeChambeau had its consequences. “That was sort of the infancy of where these swing problems have come from,” McIlroy said in March. “So it’s just a matter of trying to get back out of it.” j j j j j Well, as one wise player noted, “There are different ways to do things. … Find your own way, find your passion. Like Arnie said, ‘Swing your swing.’” That same player went on to say, proudly, that his short game and scrambling ability are big keys to his success. “I think I have a lot of creativity.” So said Bryson DeChambeau.  • Dave Shedloski is one of the most recognized writers in golf. For more than 30 years he has contributed to the leading golf publications, including the PGA TOUR Essential Guide to Golf, Golf Digest and Golfweek. He lives in Columbus, Ohio.

“I used power to my advantage…” — Jack Nicklaus