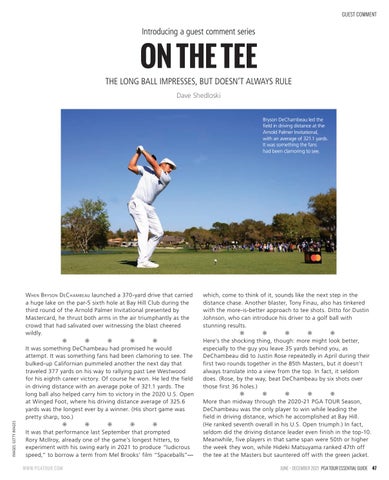 Bryson DeChambeau led the field in driving distance at the Arnold Palmer Invitational, with an average of 321.1 yards. It was something the fans had been clamoring to see.

When B ryson D e Chambeau launched a 370-yard drive that carried a huge lake on the par-5 sixth hole at Bay Hill Club during the third round of the Arnold Palmer Invitational presented by Mastercard, he thrust both arms in the air triumphantly as the crowd that had salivated over witnessing the blast cheered wildly. j j j j j It was something DeChambeau had promised he would attempt. It was something fans had been clamoring to see. The bulked-up Californian pummeled another the next day that traveled 377 yards on his way to rallying past Lee Westwood for his eighth career victory. Of course he won. He led the field in driving distance with an average poke of 321.1 yards. The long ball also helped carry him to victory in the 2020 U.S. Open at Winged Foot, where his driving distance average of 325.6 yards was the longest ever by a winner. (His short game was pretty sharp, too.) j j j j j It was that performance last September that prompted Rory McIlroy, already one of the game’s longest hitters, to experiment with his swing early in 2021 to produce “ludicrous speed,” to borrow a term from Mel Brooks’ film “Spaceballs”— w w w.p gat our.com

which, come to think of it, sounds like the next step in the distance chase. Another blaster, Tony Finau, also has tinkered with the more-is-better approach to tee shots. Ditto for Dustin Johnson, who can introduce his driver to a golf ball with stunning results. j j j j j Here’s the shocking thing, though: more might look better, especially to the guy you leave 35 yards behind you, as DeChambeau did to Justin Rose repeatedly in April during their first two rounds together in the 85th Masters, but it doesn’t always translate into a view from the top. In fact, it seldom does. (Rose, by the way, beat DeChambeau by six shots over those first 36 holes.) j j j j j More than midway through the 2020-21 PGA TOUR Season, DeChambeau was the only player to win while leading the field in driving distance, which he accomplished at Bay Hill. (He ranked seventh overall in his U.S. Open triumph.) In fact, seldom did the driving distance leader even finish in the top-10. Meanwhile, five players in that same span were 50th or higher the week they won, while Hideki Matsuyama ranked 47th off the tee at the Masters but sauntered off with the green jacket. June – December 2021  PGA TOUR ESSENTIAL GUIDE  47