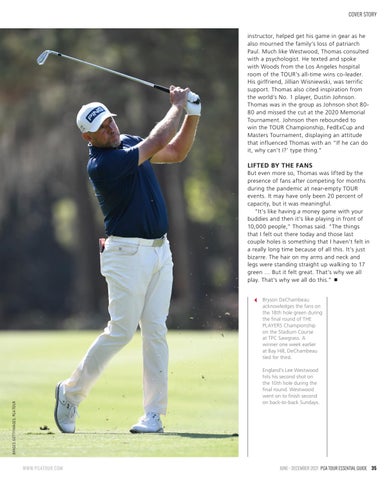 instructor, helped get his game in gear as he also mourned the family’s loss of patriarch Paul. Much like Westwood, Thomas consulted with a psychologist. He texted and spoke with Woods from the Los Angeles hospital room of the TOUR’s all-time wins co-leader. His girlfriend, Jillian Wisniewski, was terrific support. Thomas also cited inspiration from the world’s No. 1 player, Dustin Johnson. Thomas was in the group as Johnson shot 8080 and missed the cut at the 2020 Memorial Tournament. Johnson then rebounded to win the TOUR Championship, FedExCup and Masters Tournament, displaying an attitude that influenced Thomas with an “If he can do it, why can’t I?’ type thing.”

Lifted by the fans But even more so, Thomas was lifted by the presence of fans after competing for months during the pandemic at near-empty TOUR events. It may have only been 20 percent of capacity, but it was meaningful. “It’s like having a money game with your buddies and then it’s like playing in front of 10,000 people,” Thomas said. “The things that I felt out there today and those last couple holes is something that I haven’t felt in a really long time because of all this. It’s just bizarre. The hair on my arms and neck and legs were standing straight up walking to 17 green … But it felt great. That’s why we all play. That’s why we all do this.” 

acknowledges the fans on the 18th hole green during the final round of THE PLAYERS Championship on the Stadium Course at TPC Sawgrass. A winner one week earlier at Bay Hill, DeChambeau tied for third.

England’s Lee Westwood hits his second shot on the 10th hole during the final round. Westwood went on to finish second on back-to-back Sundays.