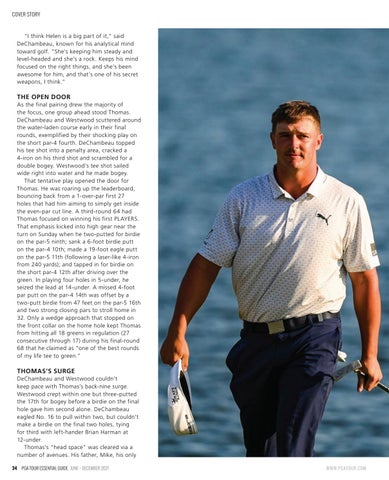 “I think Helen is a big part of it,” said DeChambeau, known for his analytical mind toward golf. “She’s keeping him steady and level-headed and she’s a rock. Keeps his mind focused on the right things, and she’s been awesome for him, and that’s one of his secret weapons, I think.”

The open door As the final pairing drew the majority of the focus, one group ahead stood Thomas. DeChambeau and Westwood scuttered around the water-laden course early in their final rounds, exemplified by their shocking play on the short par-4 fourth. DeChambeau topped his tee shot into a penalty area, cracked a 4-iron on his third shot and scrambled for a double bogey. Westwood’s tee shot sailed wide right into water and he made bogey. That tentative play opened the door for Thomas. He was roaring up the leaderboard, bouncing back from a 1-over-par first 27 holes that had him aiming to simply get inside the even-par cut line. A third-round 64 had Thomas focused on winning his first PLAYERS. That emphasis kicked into high gear near the turn on Sunday when he two-putted for birdie on the par-5 ninth; sank a 6-foot birdie putt on the par-4 10th; made a 19-foot eagle putt on the par-5 11th (following a laser-like 4-iron from 240 yards); and tapped in for birdie on the short par-4 12th after driving over the green. In playing four holes in 5-under, he seized the lead at 14-under. A missed 4-foot par putt on the par-4 14th was offset by a two-putt birdie from 47 feet on the par-5 16th and two strong closing pars to stroll home in 32. Only a wedge approach that stopped on the front collar on the home hole kept Thomas from hitting all 18 greens in regulation (27 consecutive through 17) during his final-round 68 that he claimed as “one of the best rounds of my life tee to green.”

Thomas’s surge DeChambeau and Westwood couldn’t keep pace with Thomas’s back-nine surge. Westwood crept within one but three-putted the 17th for bogey before a birdie on the final hole gave him second alone. DeChambeau eagled No. 16 to pull within two, but couldn’t make a birdie on the final two holes, tying for third with left-hander Brian Harman at 12-under. Thomas’s “head space” was cleared via a number of avenues. His father, Mike, his only 34  PGA TOUR ESSENTIAL GUIDE  June – December 2021