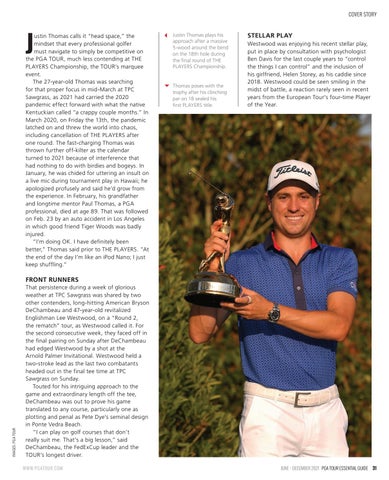 ustin Thomas calls it “head space,” the mindset that every professional golfer must navigate to simply be competitive on the PGA TOUR, much less contending at THE PLAYERS Championship, the TOUR’s marquee event. The 27-year-old Thomas was searching for that proper focus in mid-March at TPC Sawgrass, as 2021 had carried the 2020 pandemic effect forward with what the native Kentuckian called “a crappy couple months.” In March 2020, on Friday the 13th, the pandemic latched on and threw the world into chaos, including cancellation of THE PLAYERS after one round. The fast-charging Thomas was thrown further off-kilter as the calendar turned to 2021 because of interference that had nothing to do with birdies and bogeys. In January, he was chided for uttering an insult on a live mic during tournament play in Hawaii; he apologized profusely and said he’d grow from the experience. In February, his grandfather and longtime mentor Paul Thomas, a PGA professional, died at age 89. That was followed on Feb. 23 by an auto accident in Los Angeles in which good friend Tiger Woods was badly injured. “I’m doing OK. I have definitely been better,” Thomas said prior to THE PLAYERS. “At the end of the day I’m like an iPod Nano; I just keep shuffling.”

Justin Thomas plays his approach after a massive 5-wood around the bend on the 18th hole during the final round of THE PLAYERS Championship.

bb Thomas poses with the trophy after his clinching par on 18 sealed his first PLAYERS title.

Stellar play Westwood was enjoying his recent stellar play, put in place by consultation with psychologist Ben Davis for the last couple years to “control the things I can control” and the inclusion of his girlfriend, Helen Storey, as his caddie since 2018. Westwood could be seen smiling in the midst of battle, a reaction rarely seen in recent years from the European Tour’s four-time Player of the Year.

Front runners That persistence during a week of glorious weather at TPC Sawgrass was shared by two other contenders, long-hitting American Bryson DeChambeau and 47-year-old revitalized Englishman Lee Westwood, on a “Round 2, the rematch” tour, as Westwood called it. For the second consecutive week, they faced off in the final pairing on Sunday after DeChambeau had edged Westwood by a shot at the Arnold Palmer Invitational. Westwood held a two-stroke lead as the last two combatants headed out in the final tee time at TPC Sawgrass on Sunday. Touted for his intriguing approach to the game and extraordinary length off the tee, DeChambeau was out to prove his game translated to any course, particularly one as plotting and penal as Pete Dye’s seminal design in Ponte Vedra Beach. “I can play on golf courses that don’t really suit me. That’s a big lesson,” said DeChambeau, the FedExCup leader and the TOUR’s longest driver. w w w.p gat our.com