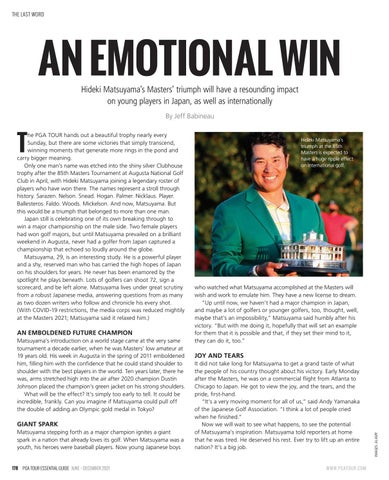 AN EMOTIONAL WIN Hideki Matsuyama’s Masters’ triumph will have a resounding impact on young players in Japan, as well as internationally By Jeff Babineau

AN EMBOLDENED FUTURE CHAMPION Matsuyama’s introduction on a world stage came at the very same tournament a decade earlier, when he was Masters’ low amateur at 19 years old. His week in Augusta in the spring of 2011 emboldened him, filling him with the confidence that he could stand shoulder to shoulder with the best players in the world. Ten years later, there he was, arms stretched high into the air after 2020 champion Dustin Johnson placed the champion’s green jacket on his strong shoulders. What will be the effect? It’s simply too early to tell. It could be incredible, frankly. Can you imagine if Matsuyama could pull off the double of adding an Olympic gold medal in Tokyo?

GIANT SPARK Matsuyama stepping forth as a major champion ignites a giant spark in a nation that already loves its golf. When Matsuyama was a youth, his heroes were baseball players. Now young Japanese boys 178

Hideki Matsuyama’s triumph at the 85th Masters is expected to have a huge ripple effect on international golf.

who watched what Matsuyama accomplished at the Masters will wish and work to emulate him. They have a new license to dream. “Up until now, we haven’t had a major champion in Japan, and maybe a lot of golfers or younger golfers, too, thought, well, maybe that’s an impossibility,” Matsuyama said humbly after his victory. “But with me doing it, hopefully that will set an example for them that it is possible and that, if they set their mind to it, they can do it, too.”

JOY AND TEARS It did not take long for Matsuyama to get a grand taste of what the people of his country thought about his victory. Early Monday after the Masters, he was on a commercial flight from Atlanta to Chicago to Japan. He got to view the joy, and the tears, and the pride, first-hand. “It’s a very moving moment for all of us,” said Andy Yamanaka of the Japanese Golf Association. “I think a lot of people cried when he finished.” Now we will wait to see what happens, to see the potential of Matsuyama’s inspiration. Matsuyama told reporters at home that he was tired. He deserved his rest. Ever try to lift up an entire nation? It’s a big job.

he PGA TOUR hands out a beautiful trophy nearly every Sunday, but there are some victories that simply transcend, winning moments that generate more rings in the pond and carry bigger meaning. Only one man’s name was etched into the shiny silver Clubhouse trophy after the 85th Masters Tournament at Augusta National Golf Club in April, with Hideki Matsuyama joining a legendary roster of players who have won there. The names represent a stroll through history. Sarazen. Nelson. Snead. Hogan. Palmer. Nicklaus. Player. Ballesteros. Faldo. Woods. Mickelson. And now, Matsuyama. But this would be a triumph that belonged to more than one man. Japan still is celebrating one of its own breaking through to win a major championship on the male side. Two female players had won golf majors, but until Matsuyama prevailed on a brilliant weekend in Augusta, never had a golfer from Japan captured a championship that echoed so loudly around the globe. Matsuyama, 29, is an interesting study. He is a powerful player and a shy, reserved man who has carried the high hopes of Japan on his shoulders for years. He never has been enamored by the spotlight he plays beneath. Lots of golfers can shoot 72, sign a scorecard, and be left alone. Matsuyama lives under great scrutiny from a robust Japanese media, answering questions from as many as two dozen writers who follow and chronicle his every shot. (With COVID-19 restrictions, the media corps was reduced mightily at the Masters 2021; Matsuyama said it relaxed him.)