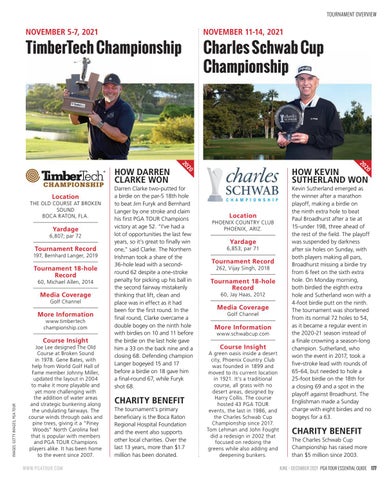 Joe Lee designed The Old Course at Broken Sound in 1978. Gene Bates, with help from World Golf Hall of Fame member Johnny Miller, updated the layout in 2004 to make it more playable and yet more challenging with the addition of water areas and strategic bunkering along the undulating fairways. The course winds through oaks and pine trees, giving it a “Piney Woods” North Carolina feel that is popular with members and PGA TOUR Champions players alike. It has been home to the event since 2007. W W W.P GAT OUR.COM

Darren Clarke two-putted for a birdie on the par-5 18th hole to beat Jim Furyk and Bernhard Langer by one stroke and claim his first PGA TOUR Champions victory at age 52. “I’ve had a lot of opportunities the last few years, so it’s great to finally win one,” said Clarke. The Northern Irishman took a share of the 36-hole lead with a secondround 62 despite a one-stroke penalty for picking up his ball in the second fairway mistakenly thinking that lift, clean and place was in effect as it had been for the first round. In the final round, Clarke overcame a double bogey on the ninth hole with birdies on 10 and 11 before the birdie on the last hole gave him a 33 on the back nine and a closing 68. Defending champion Langer bogeyed 15 and 17 before a birdie on 18 gave him a final-round 67, while Furyk shot 68.

CHARITY BENEFIT The tournament’s primary beneficiary is the Boca Raton Regional Hospital Foundation and the event also supports other local charities. Over the last 13 years, more than $1.7 million has been donated.

A green oasis inside a desert city, Phoenix Country Club was founded in 1899 and moved to its current location in 1921. It’s a traditional course, all grass with no desert areas, designed by Harry Collis. The course hosted 43 PGA TOUR events, the last in 1986, and the Charles Schwab Cup Championship since 2017. Tom Lehman and John Fought did a redesign in 2002 that focused on redoing the greens while also adding and deepening bunkers.

Kevin Sutherland emerged as the winner after a marathon playoff, making a birdie on the ninth extra hole to beat Paul Broadhurst after a tie at 15-under 198, three ahead of the rest of the field. The playoff was suspended by darkness after six holes on Sunday, with both players making all pars, Broadhurst missing a birdie try from 6 feet on the sixth extra hole. On Monday morning, both birdied the eighth extra hole and Sutherland won with a 4-foot birdie putt on the ninth. The tournament was shortened from its normal 72 holes to 54, as it became a regular event in the 2020-21 season instead of a finale crowning a season-long champion. Sutherland, who won the event in 2017, took a five-stroke lead with rounds of 65-64, but needed to hole a 25-foot birdie on the 18th for a closing 69 and a spot in the playoff against Broadhurst. The Englishman made a Sunday charge with eight birdies and no bogeys for a 63.