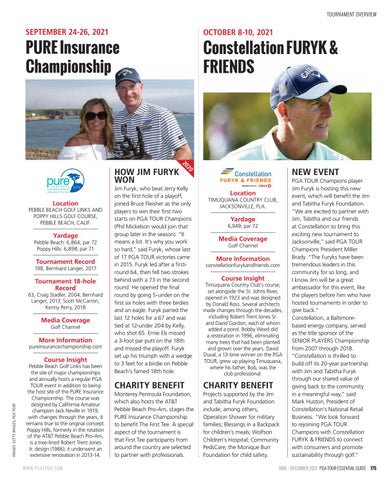 Pebble Beach Golf Links has been the site of major championships and annually hosts a regular PGA TOUR event in addition to being the host site of the PURE Insurance Championship. The course was designed by California Amateur champion Jack Neville in 1919; with changes through the years, it remains true to the original concept. Poppy Hills, formerly in the rotation of the AT&T Pebble Beach Pro-Am, is a tree-lined Robert Trent Jones Jr. design (1986); it underwent an extensive renovation in 2013-14. W W W.P GAT OUR.COM

Jim Furyk, who beat Jerry Kelly on the first hole of a playoff, joined Bruce Fleisher as the only players to win their first two starts on PGA TOUR Champions (Phil Mickelson would join that group later in the season). “It means a lot. It’s why you work so hard,” said Furyk, whose last of 17 PGA TOUR victories came in 2015. Furyk led after a firstround 64, then fell two strokes behind with a 73 in the second round. He opened the final round by going 5-under on the first six holes with three birdies and an eagle. Furyk parred the last 12 holes for a 67 and was tied at 12-under 204 by Kelly, who shot 65. Ernie Els missed a 3-foot par putt on the 18th and missed the playoff. Furyk set up his triumph with a wedge to 3 feet for a birdie on Pebble Beach’s famed 18th hole.

Timuquana Country Club’s course, set alongside the St. Johns River, opened in 1923 and was designed by Donald Ross. Several architects made changes through the decades, including Robert Trent Jones Sr. and David Gordon, each of whom added a pond. Bobby Weed did a restoration in 1996, eliminating many trees that had been planted and grown over the years. David Duval, a 13-time winner on the PGA TOUR, grew up playing Timuquana, where his father, Bob, was the club professional.

Monterey Peninsula Foundation, which also hosts the AT&T Pebble Beach Pro-Am, stages the PURE Insurance Championship to benefit The First Tee. A special aspect of the tournament is that First Tee participants from around the country are selected to partner with professionals.

Projects supported by the Jim and Tabitha Furyk Foundation include, among others, Operation Shower for military families; Blessings in a Backpack for children’s meals; Wolfson Children’s Hospital; Community PedsCare; the Monique Burr Foundation for child safety.

PGA TOUR Champions player Jim Furyk is hosting this new event, which will benefit the Jim and Tabitha Furyk Foundation. “We are excited to partner with Jim, Tabitha and our friends at Constellation to bring this exciting new tournament to Jacksonville,” said PGA TOUR Champions President Miller Brady. “The Furyks have been tremendous leaders in this community for so long, and I know Jim will be a great ambassador for this event, like the players before him who have hosted tournaments in order to give back.” Constellation, a Baltimorebased energy company, served as the title sponsor of the SENIOR PLAYERS Championship from 2007 through 2018. “Constellation is thrilled to build off its 20-year partnership with Jim and Tabitha Furyk through our shared value of giving back to the community in a meaningful way,” said Mark Huston, President of Constellation’s National Retail Business. “We look forward to rejoining PGA TOUR Champions with Constellation FURYK & FRIENDS to connect with consumers and promote sustainability through golf.”