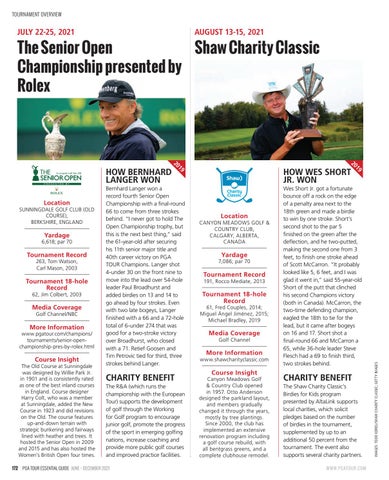 The Old Course at Sunningdale was designed by Willie Park Jr. in 1901 and is consistently rated as one of the best inland courses in England. Course designer Harry Colt, who was a member at Sunningdale, added the New Course in 1923 and did revisions on the Old. The course features up-and-down terrain with strategic bunkering and fairways lined with heather and trees. It hosted the Senior Open in 2009 and 2015 and has also hosted the Women’s British Open four times. 172

Bernhard Langer won a record fourth Senior Open Championship with a final-round 66 to come from three strokes behind. “I never got to hold The Open Championship trophy, but this is the next best thing,” said the 61-year-old after securing his 11th senior major title and 40th career victory on PGA TOUR Champions. Langer shot 4-under 30 on the front nine to move into the lead over 54-hole leader Paul Broadhurst and added birdies on 13 and 14 to go ahead by four strokes. Even with two late bogeys, Langer finished with a 66 and a 72-hole total of 6-under 274 that was good for a two-stroke victory over Broadhurst, who closed with a 71. Retief Goosen and Tim Petrovic tied for third, three strokes behind Langer.

CHARITY BENEFIT The R&A (which runs the championship with the European Tour) supports the development of golf through the Working for Golf program to encourage junior golf, promote the progress of the sport in emerging golfing nations, increase coaching and provide more public golf courses and improved practice facilities.

Canyon Meadows Golf & Country Club opened in 1957. Otto Anderson designed the parkland layout, and members gradually changed it through the years, mostly by tree plantings. Since 2000, the club has implemented an extensive renovation program including a golf course rebuild, with all bentgrass greens, and a complete clubhouse remodel.

Wes Short Jr. got a fortunate bounce off a rock on the edge of a penalty area next to the 18th green and made a birdie to win by one stroke. Short’s second shot to the par 5 finished on the green after the deflection, and he two-putted, making the second one from 3 feet, to finish one stroke ahead of Scott McCarron. “It probably looked like 5, 6 feet, and I was glad it went in,” said 55-year-old Short of the putt that clinched his second Champions victory (both in Canada). McCarron, the two-time defending champion, eagled the 18th to tie for the lead, but it came after bogeys on 16 and 17. Short shot a final-round 66 and McCarron a 65, while 36-hole leader Steve Flesch had a 69 to finish third, two strokes behind.

CHARITY BENEFIT The Shaw Charity Classic’s Birdies for Kids program presented by AltaLink supports local charities, which solicit pledges based on the number of birdies in the tournament, supplemented by up to an additional 50 percent from the tournament. The event also supports several charity partners.