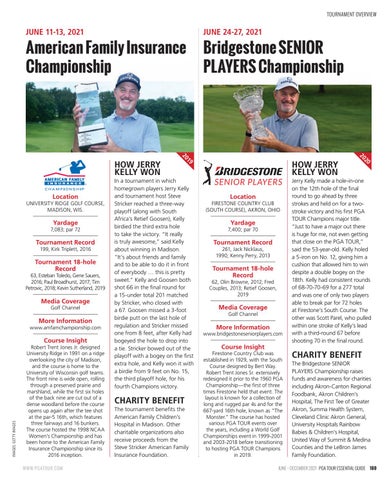 Robert Trent Jones Jr. designed University Ridge in 1991 on a ridge overlooking the city of Madison, and the course is home to the University of Wisconsin golf teams. The front nine is wide open, rolling through a preserved prairie and marshland, while the first six holes of the back nine are cut out of a dense woodland before the course opens up again after the tee shot at the par-5 16th, which features three fairways and 16 bunkers. The course hosted the 1998 NCAA Women’s Championship and has been home to the American Family Insurance Championship since its 2016 inception. W W W.P GAT OUR.COM

In a tournament in which homegrown players Jerry Kelly and tournament host Steve Stricker reached a three-way playoff (along with South Africa’s Retief Goosen), Kelly birdied the third extra hole to take the victory. “It really is truly awesome,” said Kelly about winning in Madison. “It’s about friends and family and to be able to do it in front of everybody … this is pretty sweet.” Kelly and Goosen both shot 66 in the final round for a 15-under total 201 matched by Stricker, who closed with a 67. Goosen missed a 3-foot birdie putt on the last hole of regulation and Stricker missed one from 8 feet, after Kelly had bogeyed the hole to drop into a tie. Stricker bowed out of the playoff with a bogey on the first extra hole, and Kelly won it with a birdie from 9 feet on No. 15, the third playoff hole, for his fourth Champions victory.

Firestone Country Club was established in 1929, with the South Course designed by Bert Way. Robert Trent Jones Sr. extensively redesigned it prior to the 1960 PGA Championship—the first of three times Firestone held that event. The layout is known for a collection of long and rugged par 4s and for the 667-yard 16th hole, known as “The Monster.” The course has hosted various PGA TOUR events over the years, including a World Golf Championships event in 1999-2001 and 2003-2018 before transitioning to hosting PGA TOUR Champions in 2019.

Jerry Kelly made a hole-in-one on the 12th hole of the final round to go ahead by three strokes and held on for a twostroke victory and his first PGA TOUR Champions major title. “Just to have a major out there is huge for me, not even getting that close on the PGA TOUR,” said the 53-year-old. Kelly holed a 5-iron on No. 12, giving him a cushion that allowed him to win despite a double bogey on the 18th. Kelly had consistent rounds of 68-70-70-69 for a 277 total and was one of only two players able to break par for 72 holes at Firestone’s South Course. The other was Scott Parel, who pulled within one stroke of Kelly’s lead with a third-round 67 before shooting 70 in the final round.