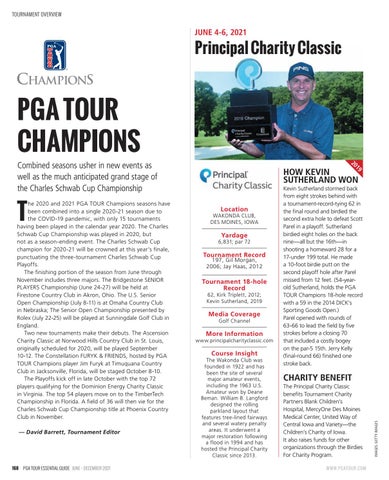 The Wakonda Club was founded in 1922 and has been the site of several major amateur events, including the 1963 U.S. Amateur won by Deane Beman. William B. Langford designed the rolling parkland layout that features tree-lined fairways and several watery penalty areas. It underwent a major restoration following a flood in 1994 and has hosted the Principal Charity Classic since 2013.

Kevin Sutherland stormed back from eight strokes behind with a tournament-record-tying 62 in the final round and birdied the second extra hole to defeat Scott Parel in a playoff. Sutherland birdied eight holes on the back nine—all but the 16th—in shooting a homeward 28 for a 17-under 199 total. He made a 10-foot birdie putt on the second playoff hole after Parel missed from 12 feet. (54-yearold Sutherland, holds the PGA TOUR Champions 18-hole record with a 59 in the 2014 DICK’s Sporting Goods Open.) Parel opened with rounds of 63-66 to lead the field by five strokes before a closing 70 that included a costly bogey on the par-5 15th. Jerry Kelly (final-round 66) finished one stroke back.

he 2020 and 2021 PGA TOUR Champions seasons have been combined into a single 2020-21 season due to the COVID-19 pandemic, with only 15 tournaments having been played in the calendar year 2020. The Charles Schwab Cup Championship was played in 2020, but not as a season-ending event. The Charles Schwab Cup champion for 2020-21 will be crowned at this year’s finale, punctuating the three-tournament Charles Schwab Cup Playoffs. The finishing portion of the season from June through November includes three majors. The Bridgestone SENIOR PLAYERS Championship (June 24-27) will be held at Firestone Country Club in Akron, Ohio. The U.S. Senior Open Championship (July 8-11) is at Omaha Country Club in Nebraska; The Senior Open Championship presented by Rolex (July 22-25) will be played at Sunningdale Golf Club in England. Two new tournaments make their debuts. The Ascension Charity Classic at Norwood Hills Country Club in St. Louis, originally scheduled for 2020, will be played September 10-12. The Constellation FURYK & FRIENDS, hosted by PGA TOUR Champions player Jim Furyk at Timuquana Country Club in Jacksonville, Florida, will be staged October 8-10. The Playoffs kick off in late October with the top 72 players qualifying for the Dominion Energy Charity Classic in Virginia. The top 54 players move on to the TimberTech Championship in Florida. A field of 36 will then vie for the Charles Schwab Cup Championship title at Phoenix Country Club in November.