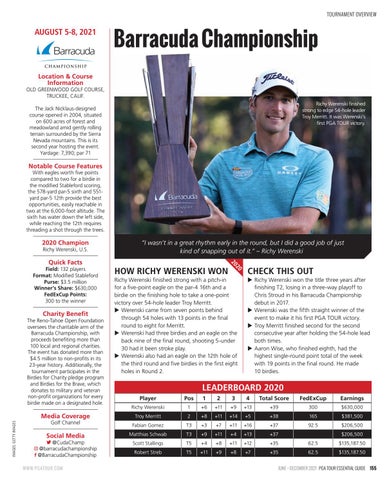 The Jack Nicklaus-designed course opened in 2004, situated on 600 acres of forest and meadowland amid gently rolling terrain surrounded by the Sierra Nevada mountains. This is its second year hosting the event. Yardage: 7,390; par 71

With eagles worth five points compared to two for a birdie in the modified Stableford scoring, the 578-yard par-5 sixth and 551yard par-5 12th provide the best opportunities, easily reachable in two at the 6,000-foot altitude. The sixth has water down the left side, while reaching the 12th requires threading a shot through the trees.

The Reno-Tahoe Open Foundation oversees the charitable arm of the Barracuda Championship, with proceeds benefiting more than 100 local and regional charities. The event has donated more than $4.5 million to non-profits in its 23-year history. Additionally, the tournament participates in the Birdies for Charity pledge program and Birdies for the Brave, which donates to military and veteran non-profit organizations for every birdie made on a designated hole.

“I wasn’t in a great rhythm early in the round, but I did a good job of just kind of snapping out of it.” – Richy Werenski

CHECK THIS OUT  Richy Werenski won the title three years after finishing T2, losing in a three-way playoff to Chris Stroud in his Barracuda Championship debut in 2017.  Werenski was the fifth straight winner of the event to make it his first PGA TOUR victory.  Troy Merritt finished second for the second consecutive year after holding the 54-hole lead both times.  Aaron Wise, who finished eighth, had the highest single-round point total of the week with 19 points in the final round. He made 10 birdies.