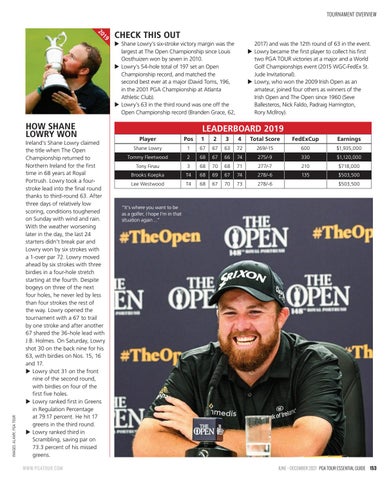 HOW SHANE LOWRY WON Ireland’s Shane Lowry claimed the title when The Open Championship returned to Northern Ireland for the first time in 68 years at Royal Portrush. Lowry took a fourstroke lead into the final round thanks to third-round 63. After three days of relatively low scoring, conditions toughened on Sunday with wind and rain. With the weather worsening later in the day, the last 24 starters didn’t break par and Lowry won by six strokes with a 1-over par 72. Lowry moved ahead by six strokes with three birdies in a four-hole stretch starting at the fourth. Despite bogeys on three of the next four holes, he never led by less than four strokes the rest of the way. Lowry opened the tournament with a 67 to trail by one stroke and after another 67 shared the 36-hole lead with J.B. Holmes. On Saturday, Lowry shot 30 on the back nine for his 63, with birdies on Nos. 15, 16 and 17.  Lowry shot 31 on the front nine of the second round, with birdies on four of the first five holes.  Lowry ranked first in Greens in Regulation Percentage at 79.17 percent. He hit 17 greens in the third round.  Lowry ranked third in Scrambling, saving par on 73.3 percent of his missed greens. W W W.P GAT OUR.COM

2017) and was the 12th round of 63 in the event.  Lowry became the first player to collect his first two PGA TOUR victories at a major and a World Golf Championships event (2015 WGC-FedEx St. Jude Invitational).  Lowry, who won the 2009 Irish Open as an amateur, joined four others as winners of the Irish Open and The Open since 1960 (Seve Ballesteros, Nick Faldo, Padraig Harrington, Rory McIlroy).