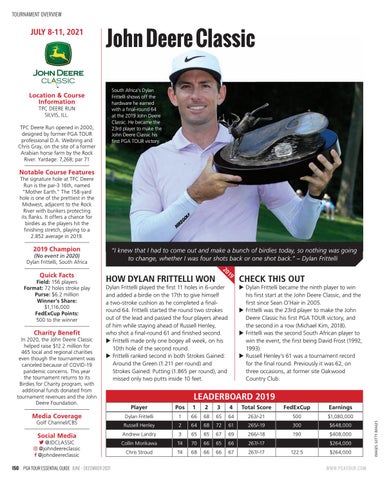 Notable Course Features The signature hole at TPC Deere Run is the par-3 16th, named “Mother Earth.” The 158-yard hole is one of the prettiest in the Midwest, adjacent to the Rock River with bunkers protecting its flanks. It offers a chance for birdies as the players hit the finishing stretch, playing to a 2.852 average in 2019.

“I knew that I had to come out and make a bunch of birdies today, so nothing was going to change, whether I was four shots back or one shot back.” – Dylan Frittelli

CHECK THIS OUT  Dylan Frittelli became the ninth player to win his first start at the John Deere Classic, and the first since Sean O’Hair in 2005.  Frittelli was the 23rd player to make the John Deere Classic his first PGA TOUR victory, and the second in a row (Michael Kim, 2018).  Frittelli was the second South African player to win the event, the first being David Frost (1992, 1993).  Russell Henley’s 61 was a tournament record for the final round. Previously it was 62, on three occasions, at former site Oakwood Country Club.

Dylan Frittelli played the first 11 holes in 6-under and added a birdie on the 17th to give himself a two-stroke cushion as he completed a finalround 64. Frittelli started the round two strokes out of the lead and passed the four players ahead of him while staying ahead of Russell Henley, who shot a final-round 61 and finished second.  Frittelli made only one bogey all week, on his 10th hole of the second round.  Frittelli ranked second in both Strokes Gained: Around the Green (1.211 per round) and Strokes Gained: Putting (1.865 per round), and missed only two putts inside 10 feet.