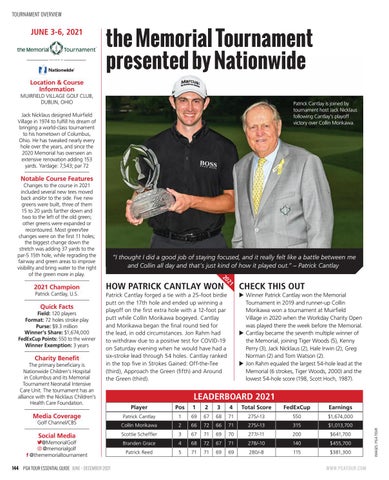 the Memorial Tournament presented by Nationwide

Jack Nicklaus designed Muirfield Village in 1974 to fulfill his dream of bringing a world-class tournament to his hometown of Columbus, Ohio. He has tweaked nearly every hole over the years, and since the 2020 Memorial has overseen an extensive renovation adding 153 yards. Yardage: 7,543; par 72

Changes to the course in 2021 included several new tees moved back and/or to the side. Five new greens were built, three of them 15 to 20 yards farther down and two to the left of the old green; other greens were expanded or recontoured. Most green/tee changes were on the first 11 holes; the biggest change down the stretch was adding 37 yards to the par-5 15th hole, while regrading the fairway and green areas to improve visibility and bring water to the right of the green more in play.

The primary beneficiary is Nationwide Children’s Hospital in Columbus and its Memorial Tournament Neonatal Intensive Care Unit. The tournament has an alliance with the Nicklaus Children’s Health Care Foundation.

Patrick Cantlay forged a tie with a 25-foot birdie putt on the 17th hole and ended up winning a playoff on the first extra hole with a 12-foot par putt while Collin Morikawa bogeyed. Cantlay and Morikawa began the final round tied for the lead, in odd circumstances. Jon Rahm had to withdraw due to a positive test for COVID-19 on Saturday evening when he would have had a six-stroke lead through 54 holes. Cantlay ranked in the top five in Strokes Gained: Off-the-Tee (third), Approach the Green (fifth) and Around the Green (third).

“I thought I did a good job of staying focused, and it really felt like a battle between me and Collin all day and that’s just kind of how it played out.” – Patrick Cantlay