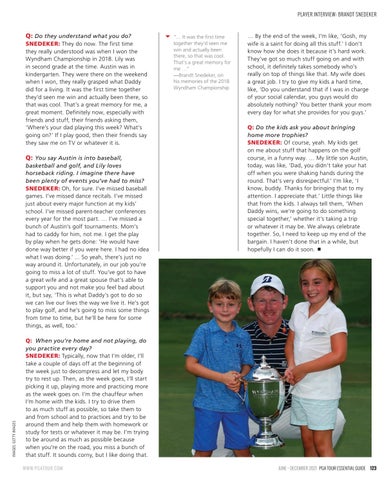 Q: Do they understand what you do? SNEDEKER: They do now. The first time they really understood was when I won the Wyndham Championship in 2018. Lily was in second grade at the time. Austin was in kindergarten. They were there on the weekend when I won, they really grasped what Daddy did for a living. It was the first time together they’d seen me win and actually been there, so that was cool. That’s a great memory for me, a great moment. Definitely now, especially with friends and stuff, their friends asking them, ‘Where’s your dad playing this week? What’s going on?’ If I play good, then their friends say they saw me on TV or whatever it is.

Q: You say Austin is into baseball, basketball and golf, and Lily loves horseback riding. I imagine there have been plenty of events you’ve had to miss? SNEDEKER: Oh, for sure. I’ve missed baseball games. I’ve missed dance recitals. I’ve missed just about every major function at my kids’ school. I’ve missed parent-teacher conferences every year for the most part. … I’ve missed a bunch of Austin’s golf tournaments. Mom’s had to caddy for him, not me. I get the play by play when he gets done: ‘He would have done way better if you were here. I had no idea what I was doing.’ ... So yeah, there’s just no way around it. Unfortunately, in our job you’re going to miss a lot of stuff. You’ve got to have a great wife and a great spouse that’s able to support you and not make you feel bad about it, but say, ‘This is what Daddy’s got to do so we can live our lives the way we live it. He’s got to play golf, and he’s going to miss some things from time to time, but he’ll be here for some things, as well, too.’

bb “… It was the first time together they’d seen me win and actually been there, so that was cool. That’s a great memory for me …” —Brandt Snedeker, on his memories of the 2018 Wyndham Championship

… By the end of the week, I’m like, ‘Gosh, my wife is a saint for doing all this stuff.’ I don’t know how she does it because it’s hard work. They’ve got so much stuff going on and with school, it definitely takes somebody who’s really on top of things like that. My wife does a great job. I try to give my kids a hard time, like, ‘Do you understand that if I was in charge of your social calendar, you guys would do absolutely nothing? You better thank your mom every day for what she provides for you guys.’ Q: Do the kids ask you about bringing home more trophies? SNEDEKER: Of course, yeah. My kids get on me about stuff that happens on the golf course, in a funny way. … My little son Austin, today, was like, ‘Dad, you didn’t take your hat off when you were shaking hands during the round. That’s very disrespectful.’ I’m like, ‘I know, buddy. Thanks for bringing that to my attention. I appreciate that.’ Little things like that from the kids. I always tell them, ‘When Daddy wins, we’re going to do something special together,’ whether it’s taking a trip or whatever it may be. We always celebrate together. So, I need to keep up my end of the bargain. I haven’t done that in a while, but hopefully I can do it soon. 

Q: When you’re home and not playing, do you practice every day? SNEDEKER: Typically, now that I’m older, I’ll take a couple of days off at the beginning of the week just to decompress and let my body try to rest up. Then, as the week goes, I’ll start picking it up, playing more and practicing more as the week goes on. I’m the chauffeur when I’m home with the kids. I try to drive them to as much stuff as possible, so take them to and from school and to practices and try to be around them and help them with homework or study for tests or whatever it may be. I’m trying to be around as much as possible because when you’re on the road, you miss a bunch of that stuff. It sounds corny, but I like doing that. w w w.p gat our.com