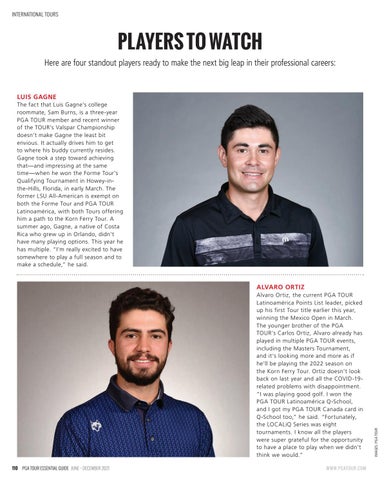 PLAYERS TO WATCH Here are four standout players ready to make the next big leap in their professional careers:

Luis Gagne The fact that Luis Gagne’s college roommate, Sam Burns, is a three-year PGA TOUR member and recent winner of the TOUR’s Valspar Championship doesn’t make Gagne the least bit envious. It actually drives him to get to where his buddy currently resides. Gagne took a step toward achieving that—and impressing at the same time—when he won the Forme Tour’s Qualifying Tournament in Howey-inthe-Hills, Florida, in early March. The former LSU All-American is exempt on both the Forme Tour and PGA TOUR Latinoamérica, with both Tours offering him a path to the Korn Ferry Tour. A summer ago, Gagne, a native of Costa Rica who grew up in Orlando, didn’t have many playing options. This year he has multiple. “I’m really excited to have somewhere to play a full season and to make a schedule,” he said.

Alvaro Ortiz, the current PGA TOUR Latinoamérica Points List leader, picked up his first Tour title earlier this year, winning the Mexico Open in March. The younger brother of the PGA TOUR’s Carlos Ortiz, Alvaro already has played in multiple PGA TOUR events, including the Masters Tournament, and it’s looking more and more as if he’ll be playing the 2022 season on the Korn Ferry Tour. Ortiz doesn’t look back on last year and all the COVID-19related problems with disappointment. “I was playing good golf. I won the PGA TOUR Latinoamérica Q-School, and I got my PGA TOUR Canada card in Q-School too,” he said. “Fortunately, the LOCALiQ Series was eight tournaments. I know all the players were super grateful for the opportunity to have a place to play when we didn’t think we would.” 110  PGA TOUR ESSENTIAL GUIDE  June – December 2021