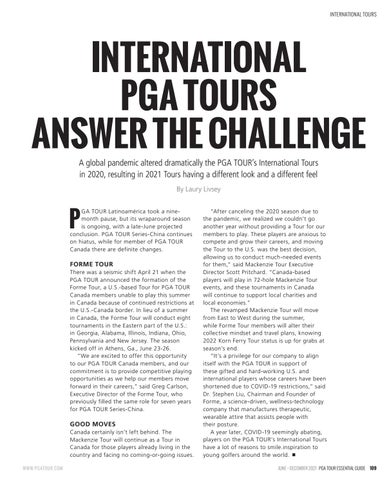 INTERNATIONAL PGA TOURS ANSWER THE CHALLENGE A global pandemic altered dramatically the PGA TOUR’s International Tours in 2020, resulting in 2021 Tours having a different look and a different feel By Laury Livsey

GA TOUR Latinoamérica took a ninemonth pause, but its wraparound season is ongoing, with a late-June projected conclusion. PGA TOUR Series-China continues on hiatus, while for member of PGA TOUR Canada there are definite changes.

Forme Tour There was a seismic shift April 21 when the PGA TOUR announced the formation of the Forme Tour, a U.S.-based Tour for PGA TOUR Canada members unable to play this summer in Canada because of continued restrictions at the U.S.-Canada border. In lieu of a summer in Canada, the Forme Tour will conduct eight tournaments in the Eastern part of the U.S.: in Georgia, Alabama, Illinois, Indiana, Ohio, Pennsylvania and New Jersey. The season kicked off in Athens, Ga., June 23-26. “We are excited to offer this opportunity to our PGA TOUR Canada members, and our commitment is to provide competitive playing opportunities as we help our members move forward in their careers,” said Greg Carlson, Executive Director of the Forme Tour, who previously filled the same role for seven years for PGA TOUR Series-China.

Good moves Canada certainly isn’t left behind. The Mackenzie Tour will continue as a Tour in Canada for those players already living in the country and facing no coming-or-going issues. w w w.p gat our.com

“After canceling the 2020 season due to the pandemic, we realized we couldn’t go another year without providing a Tour for our members to play. These players are anxious to compete and grow their careers, and moving the Tour to the U.S. was the best decision, allowing us to conduct much-needed events for them,” said Mackenzie Tour Executive Director Scott Pritchard. “Canada-based players will play in 72-hole Mackenzie Tour events, and these tournaments in Canada will continue to support local charities and local economies.” The revamped Mackenzie Tour will move from East to West during the summer, while Forme Tour members will alter their collective mindset and travel plans, knowing 2022 Korn Ferry Tour status is up for grabs at season’s end. “It’s a privilege for our company to align itself with the PGA TOUR in support of these gifted and hard-working U.S. and international players whose careers have been shortened due to COVID-19 restrictions,” said Dr. Stephen Liu, Chairman and Founder of Forme, a science-driven, wellness-technology company that manufactures therapeutic, wearable attire that assists people with their posture. A year later, COVID-19 seemingly abating, players on the PGA TOUR’s International Tours have a lot of reasons to smile.inspiration to young golfers around the world.  June – December 2021  PGA TOUR ESSENTIAL GUIDE  109