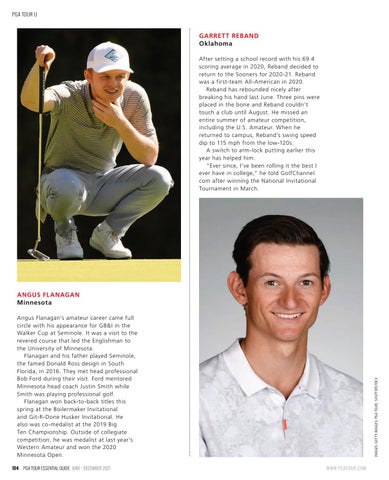 GARRETT REBAND Oklahoma After setting a school record with his 69.4 scoring average in 2020, Reband decided to return to the Sooners for 2020-21. Reband was a first-team All-American in 2020. Reband has rebounded nicely after breaking his hand last June. Three pins were placed in the bone and Reband couldn’t touch a club until August. He missed an entire summer of amateur competition, including the U.S. Amateur. When he returned to campus, Reband’s swing speed dip to 115 mph from the low-120s. A switch to arm-lock putting earlier this year has helped him. “Ever since, I’ve been rolling it the best I ever have in college,” he told GolfChannel. com after winning the National Invitational Tournament in March.

Angus Flanagan’s amateur career came full circle with his appearance for GB&I in the Walker Cup at Seminole. It was a visit to the revered course that led the Englishman to the University of Minnesota. Flanagan and his father played Seminole, the famed Donald Ross design in South Florida, in 2016. They met head professional Bob Ford during their visit. Ford mentored Minnesota head coach Justin Smith while Smith was playing professional golf. Flanagan won back-to-back titles this spring at the Boilermaker Invitational and Git-R-Done Husker Invitational. He also was co-medalist at the 2019 Big Ten Championship. Outside of collegiate competition, he was medalist at last year’s Western Amateur and won the 2020 Minnesota Open. w w w.p gat our.com