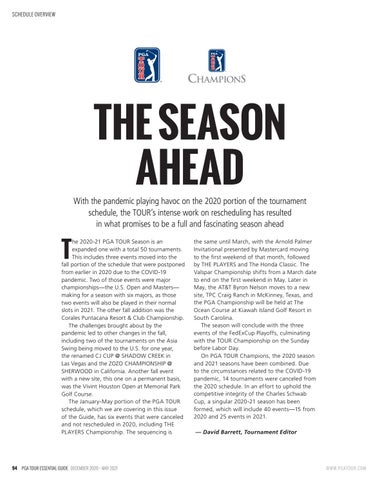 With the pandemic playing havoc on the 2020 portion of the tournament schedule, the TOUR’s intense work on rescheduling has resulted in what promises to be a full and fascinating season ahead

he 2020-21 PGA TOUR Season is an expanded one with a total 50 tournaments. This includes three events moved into the fall portion of the schedule that were postponed from earlier in 2020 due to the COVID-19 pandemic. Two of those events were major championships—the U.S. Open and Masters— making for a season with six majors, as those two events will also be played in their normal slots in 2021. The other fall addition was the Corales Puntacana Resort & Club Championship. The challenges brought about by the pandemic led to other changes in the fall, including two of the tournaments on the Asia Swing being moved to the U.S. for one year, the renamed CJ CUP @ SHADOW CREEK in Las Vegas and the ZOZO CHAMPIONSHIP @ SHERWOOD in California. Another fall event with a new site, this one on a permanent basis, was the Vivint Houston Open at Memorial Park Golf Course. The January-May portion of the PGA TOUR schedule, which we are covering in this issue of the Guide, has six events that were canceled and not rescheduled in 2020, including THE PLAYERS Championship. The sequencing is

the same until March, with the Arnold Palmer Invitational presented by Mastercard moving to the first weekend of that month, followed by THE PLAYERS and The Honda Classic. The Valspar Championship shifts from a March date to end on the first weekend in May. Later in May, the AT&T Byron Nelson moves to a new site, TPC Craig Ranch in McKinney, Texas, and the PGA Championship will be held at The Ocean Course at Kiawah Island Golf Resort in South Carolina. The season will conclude with the three events of the FedExCup Playoffs, culminating with the TOUR Championship on the Sunday before Labor Day. On PGA TOUR Champions, the 2020 season and 2021 seasons have been combined. Due to the circumstances related to the COVID-19 pandemic, 14 tournaments were canceled from the 2020 schedule. In an effort to uphold the competitive integrity of the Charles Schwab Cup, a singular 2020-21 season has been formed, which will include 40 events—15 from 2020 and 25 events in 2021. — David Barrett, Tournament Editor