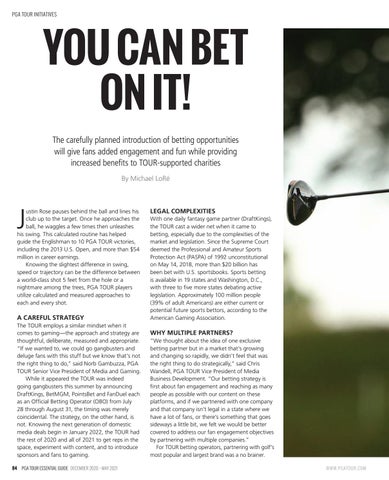 YOU CAN BET ON IT! The carefully planned introduction of betting opportunities will give fans added engagement and fun while providing increased benefits to TOUR-supported charities By Michael LoRé

ustin Rose pauses behind the ball and lines his club up to the target. Once he approaches the ball, he waggles a few times then unleashes his swing. This calculated routine has helped guide the Englishman to 10 PGA TOUR victories, including the 2013 U.S. Open, and more than $54 million in career earnings. Knowing the slightest difference in swing, speed or trajectory can be the difference between a world-class shot 5 feet from the hole or a nightmare among the trees, PGA TOUR players utilize calculated and measured approaches to each and every shot.

A cAreful strAtegy The TOUR employs a similar mindset when it comes to gaming—the approach and strategy are thoughtful, deliberate, measured and appropriate. “If we wanted to, we could go gangbusters and deluge fans with this stuff but we know that’s not the right thing to do,” said Norb Gambuzza, PGA TOUR Senior Vice President of Media and Gaming. While it appeared the TOUR was indeed going gangbusters this summer by announcing DraftKings, BetMGM, PointsBet and FanDuel each as an Official Betting Operator (OBO) from July 28 through August 31, the timing was merely coincidental. The strategy, on the other hand, is not. Knowing the next generation of domestic media deals begin in January 2022, the TOUR had the rest of 2020 and all of 2021 to get reps in the space, experiment with content, and to introduce sponsors and fans to gaming. 84

legAl complexities With one daily fantasy game partner (DraftKings), the TOUR cast a wider net when it came to betting, especially due to the complexities of the market and legislation. Since the Supreme Court deemed the Professional and Amateur Sports Protection Act (PASPA) of 1992 unconstitutional on May 14, 2018, more than $20 billion has been bet with U.S. sportsbooks. Sports betting is available in 19 states and Washington, D.C., with three to five more states debating active legislation. Approximately 100 million people (39% of adult Americans) are either current or potential future sports bettors, according to the American Gaming Association.

Why multiple pArtners? “We thought about the idea of one exclusive betting partner but in a market that’s growing and changing so rapidly, we didn’t feel that was the right thing to do strategically,” said Chris Wandell, PGA TOUR Vice President of Media Business Development. “Our betting strategy is first about fan engagement and reaching as many people as possible with our content on these platforms, and if we partnered with one company and that company isn’t legal in a state where we have a lot of fans, or there’s something that goes sideways a little bit, we felt we would be better covered to address our fan engagement objectives by partnering with multiple companies.” For TOUR betting operators, partnering with golf’s most popular and largest brand was a no brainer. w w w.p gat our.com