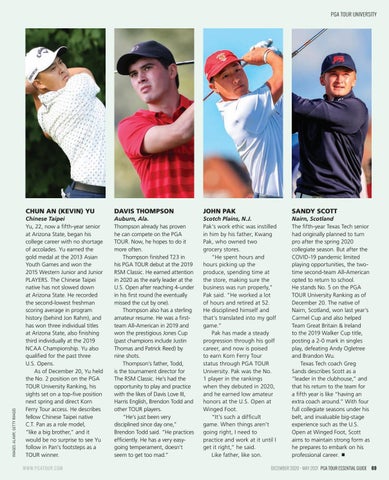 Chinese Taipei Yu, 22, now a fifth-year senior at Arizona State, began his college career with no shortage of accolades. Yu earned the gold medal at the 2013 Asian Youth Games and won the 2015 Western Junior and Junior PLAYERS. The Chinese Taipei native has not slowed down at Arizona State. He recorded the second-lowest freshman scoring average in program history (behind Jon Rahm), and has won three individual titles at Arizona State, also finishing third individually at the 2019 NCAA Championship. Yu also qualified for the past three U.S. Opens. As of December 20, Yu held the No. 2 position on the PGA TOUR University Ranking, his sights set on a top-five position next spring and direct Korn Ferry Tour access. He describes fellow Chinese Taipei native C.T. Pan as a role model, “like a big brother,” and it would be no surprise to see Yu follow in Pan’s footsteps as a TOUR winner.

Auburn, Ala. Thompson already has proven he can compete on the PGA TOUR. Now, he hopes to do it more often. Thompson finished T23 in his PGA TOUR debut at the 2019 RSM Classic. He earned attention in 2020 as the early leader at the U.S. Open after reaching 4-under in his first round (he eventually missed the cut by one). Thompson also has a sterling amateur resume. He was a firstteam All-American in 2019 and won the prestigious Jones Cup (past champions include Justin Thomas and Patrick Reed) by nine shots. Thompson’s father, Todd, is the tournament director for The RSM Classic. He’s had the opportunity to play and practice with the likes of Davis Love III, Harris English, Brendon Todd and other TOUR players. “He’s just been very disciplined since day one,” Brendon Todd said. “He practices efficiently. He has a very easygoing temperament, doesn’t seem to get too mad.”

Scotch Plains, N.J. Pak’s work ethic was instilled in him by his father, Kwang Pak, who owned two grocery stores. “He spent hours and hours picking up the produce, spending time at the store, making sure the business was run properly,” Pak said. “He worked a lot of hours and retired at 52. He disciplined himself and that’s translated into my golf game.” Pak has made a steady progression through his golf career, and now is poised to earn Korn Ferry Tour status through PGA TOUR University. Pak was the No. 1 player in the rankings when they debuted in 2020, and he earned low amateur honors at the U.S. Open at Winged Foot. “It’s such a difficult game. When things aren’t going right, I need to practice and work at it until I get it right,” he said. Like father, like son.

Nairn, Scotland The fifth-year Texas Tech senior had originally planned to turn pro after the spring 2020 collegiate season. But after the COVID-19 pandemic limited playing opportunities, the twotime second-team All-American opted to return to school. He stands No. 5 on the PGA TOUR University Ranking as of December 20. The native of Nairn, Scotland, won last year’s Carmel Cup and also helped Team Great Britain & Ireland to the 2019 Walker Cup title, posting a 2-0 mark in singles play, defeating Andy Ogletree and Brandon Wu. Texas Tech coach Greg Sands describes Scott as a “leader in the clubhouse,” and that his return to the team for a fifth year is like “having an extra coach around.” With four full collegiate seasons under his belt, and invaluable big-stage experience such as the U.S. Open at Winged Foot, Scott aims to maintain strong form as he prepares to embark on his professional career. 