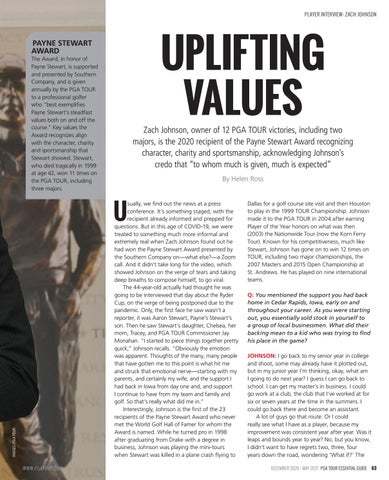 PAYNE STEWART AWARD The Award, in honor of Payne Stewart, is supported and presented by Southern Company, and is given annually by the PGA TOUR to a professional golfer who “best exemplifies Payne Stewart’s steadfast values both on and off the course.” Key values the Award recognizes align with the character, charity and sportsmanship that Stewart showed. Stewart, who died tragically in 1999 at age 42, won 11 times on the PGA TOUR, including three majors.

Zach Johnson, owner of 12 Pga TOUR victories, including two majors, is the 2020 recipient of the Payne stewart award recognizing character, charity and sportsmanship, acknowledging Johnson’s credo that “to whom much is given, much is expected” By Helen Ross

sually, we find out the news at a press conference. It’s something staged, with the recipient already informed and prepped for questions. But in this age of COVID-19, we were treated to something much more informal and extremely real when Zach Johnson found out he had won the Payne Stewart Award presented by the Southern Company on—what else?—a Zoom call. And it didn’t take long for the video, which showed Johnson on the verge of tears and taking deep breaths to compose himself, to go viral. The 44-year-old actually had thought he was going to be interviewed that day about the Ryder Cup, on the verge of being postponed due to the pandemic. Only, the first face he saw wasn’t a reporter, it was Aaron Stewart, Payne’s Stewart’s son. Then he saw Stewart’s daughter, Chelsea, her mom, Tracey, and PGA TOUR Commissioner Jay Monahan. “I started to piece things together pretty quick,” Johnson recalls. “Obviously the emotion was apparent. Thoughts of the many, many people that have gotten me to this point is what hit me and struck that emotional nerve—starting with my parents, and certainly my wife, and the support I had back in Iowa from day one and, and support I continue to have from my team and family and golf. So that’s really what did me in.” Interestingly, Johnson is the first of the 23 recipients of the Payne Stewart Award who never met the World Golf Hall of Famer for whom the Award is named. While he turned pro in 1998 after graduating from Drake with a degree in business, Johnson was playing the mini-tours when Stewart was killed in a plane crash flying to

Dallas for a golf course site visit and then Houston to play in the 1999 TOUR Championship. Johnson made it to the PGA TOUR in 2004 after earning Player of the Year honors on what was then (2003) the Nationwide Tour (now the Korn Ferry Tour). Known for his competitiveness, much like Stewart, Johnson has gone on to win 12 times on TOUR, including two major championships, the 2007 Masters and 2015 Open Championship at St. Andrews. He has played on nine international teams. Q: You mentioned the support you had back home in Cedar Rapids, Iowa, early on and throughout your career. As you were starting out, you essentially sold stock in yourself to a group of local businessmen. What did their backing mean to a kid who was trying to find his place in the game? JOHNSON: I go back to my senior year in college and shoot, some may already have it plotted out, but in my junior year I’m thinking, okay, what am I going to do next year? I guess I can go back to school. I can get my master’s in business. I could go work at a club, the club that I’ve worked at for six or seven years at the time in the summers. I could go back there and become an assistant. A lot of guys go that route. Or I could really see what I have as a player, because my improvement was consistent year after year. Was it leaps and bounds year to year? No, but you know, I didn’t want to have regrets two, three, four years down the road, wondering ‘What if?’ The DECEMBER 2020 – MAY 2021 PGA TOUR ESSENTIAL GUIDE