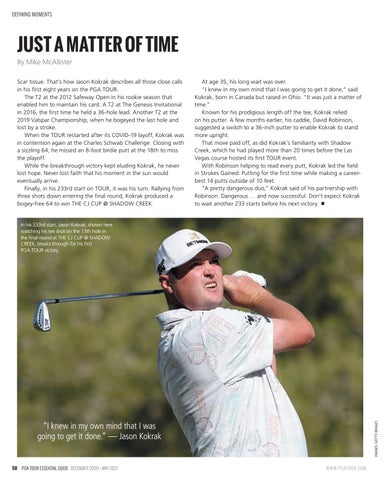 JUST A MATTER OF TIME By Mike McAllister Scar tissue. That’s how Jason Kokrak describes all those close calls in his first eight years on the PGA TOUR. The T2 at the 2012 Safeway Open in his rookie season that enabled him to maintain his card. A T2 at The Genesis Invitational in 2016, the first time he held a 36-hole lead. Another T2 at the 2019 Valspar Championship, when he bogeyed the last hole and lost by a stroke. When the TOUR restarted after its COVID-19 layoff, Kokrak was in contention again at the Charles Schwab Challenge. Closing with a sizzling 64, he missed an 8-foot birdie putt at the 18th to miss the playoff. While the breakthrough victory kept eluding Kokrak, he never lost hope. Never lost faith that his moment in the sun would eventually arrive. Finally, in his 233rd start on TOUR, it was his turn. Rallying from three shots down entering the final round, Kokrak produced a bogey-free 64 to win THE CJ CUP @ SHADOW CREEK.

At age 35, his long wait was over. “I knew in my own mind that I was going to get it done,” said Kokrak, born in Canada but raised in Ohio. “It was just a matter of time.” Known for his prodigious length off the tee, Kokrak relied on his putter. A few months earlier, his caddie, David Robinson, suggested a switch to a 36-inch putter to enable Kokrak to stand more upright. That move paid off, as did Kokrak’s familiarity with Shadow Creek, which he had played more than 20 times before the Las Vegas course hosted its first TOUR event. With Robinson helping to read every putt, Kokrak led the field in Strokes Gained: Putting for the first time while making a careerbest 14 putts outside of 10 feet. “A pretty dangerous duo,” Kokrak said of his partnership with Robinson. Dangerous … and now successful. Don’t expect Kokrak to wait another 233 starts before his next victory. 

In his 233rd start, Jason Kokrak, shown here watching his tee shot on the 13th hole in the final round at THE CJ CUP @ SHADOW CREEK, breaks through for his first PGA TOUR victory.

“i knew in my own mind that i was going to get it done.” — Jason Kokrak