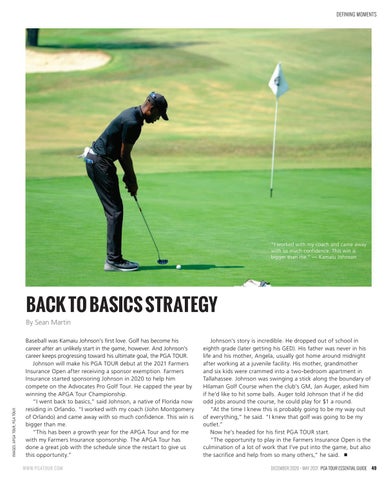 “I worked with my coach and came away with so much confidence. This win is bigger than me.” — Kamaiu Johnson

BACK TO BASICS STRATEGY

By Sean Martin Baseball was Kamaiu Johnson’s first love. Golf has become his career after an unlikely start in the game, however. And Johnson’s career keeps progressing toward his ultimate goal, the PGA TOUR. Johnson will make his PGA TOUR debut at the 2021 Farmers Insurance Open after receiving a sponsor exemption. Farmers Insurance started sponsoring Johnson in 2020 to help him compete on the Advocates Pro Golf Tour. He capped the year by winning the APGA Tour Championship. “I went back to basics,” said Johnson, a native of Florida now residing in Orlando. “I worked with my coach (John Montgomery of Orlando) and came away with so much confidence. This win is bigger than me. “This has been a growth year for the APGA Tour and for me with my Farmers Insurance sponsorship. The APGA Tour has done a great job with the schedule since the restart to give us this opportunity.” w w w.p G aT Our.cOM

Johnson’s story is incredible. He dropped out of school in eighth grade (later getting his GED). His father was never in his life and his mother, Angela, usually got home around midnight after working at a juvenile facility. His mother, grandmother and six kids were crammed into a two-bedroom apartment in Tallahassee. Johnson was swinging a stick along the boundary of Hilaman Golf Course when the club’s GM, Jan Auger, asked him if he’d like to hit some balls. Auger told Johnson that if he did odd jobs around the course, he could play for $1 a round. “At the time I knew this is probably going to be my way out of everything,” he said. “I knew that golf was going to be my outlet.” Now he’s headed for his first PGA TOUR start. “The opportunity to play in the Farmers Insurance Open is the culmination of a lot of work that I’ve put into the game, but also the sacrifice and help from so many others,” he said.  DECEMBER 2020 – MAY 2021 PGA TOUR ESSENTIAL GUIDE