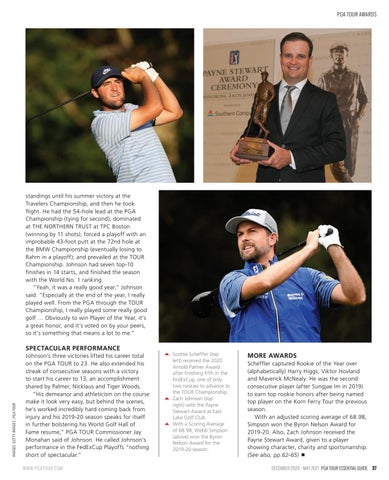 standings until his summer victory at the Travelers Championship, and then he took flight. He had the 54-hole lead at the PGA Championship (tying for second); dominated at THE NORTHERN TRUST at TPC Boston (winning by 11 shots); forced a playoff with an improbable 43-foot putt at the 72nd hole at the BMW Championship (eventually losing to Rahm in a playoff); and prevailed at the TOUR Championship. Johnson had seven top-10 finishes in 14 starts, and finished the season with the World No. 1 ranking. “Yeah, it was a really good year,” Johnson said. “Especially at the end of the year, I really played well. From the PGA through the TOUR Championship, I really played some really good golf … Obviously to win Player of the Year, it’s a great honor, and it’s voted on by your peers, so it’s something that means a lot to me.”

Spectacular performance Johnson’s three victories lifted his career total on the PGA TOUR to 23. He also extended his streak of consecutive seasons with a victory to start his career to 13, an accomplishment shared by Palmer, Nicklaus and Tiger Woods. “His demeanor and athleticism on the course make it look very easy, but behind the scenes, he’s worked incredibly hard coming back from injury and his 2019-20 season speaks for itself in further bolstering his World Golf Hall of Fame resume,” PGA TOUR Commissioner Jay Monahan said of Johnson. He called Johnson’s performance in the FedExCup Playoffs “nothing short of spectacular.” W W W.P GAT OUR.cOm

Scottie Scheffler (top left) received the 2020 Arnold Palmer Award after finishing fifth in the FedExCup, one of only two rookies to advance to the TOUR Championship. Zach Johnson (top right) with the Payne Stewart Award at East Lake Golf Club. With a Scoring Average of 68.98, Webb Simpson (above) won the Byron Nelson Award for the 2019-20 season.

more awardS Scheffler captured Rookie of the Year over (alphabetically) Harry Higgs, Viktor Hovland and Maverick McNealy. He was the second consecutive player (after Sungjae Im in 2019) to earn top rookie honors after being named top player on the Korn Ferry Tour the previous season. With an adjusted scoring average of 68.98, Simpson won the Byron Nelson Award for 2019-20. Also, Zach Johnson received the Payne Stewart Award, given to a player showing character, charity and sportsmanship. (See also, pp.62-65)  DECEMBER 2020 – MAY 2021 PGA TOUR ESSENTIAL GUIDE