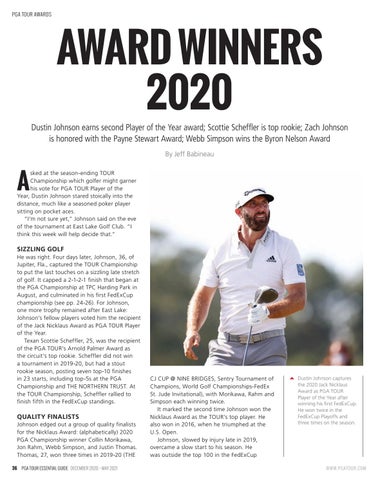 sked at the season-ending TOUR Championship which golfer might garner his vote for PGA TOUR Player of the Year, Dustin Johnson stared stoically into the distance, much like a seasoned poker player sitting on pocket aces. “I’m not sure yet,” Johnson said on the eve of the tournament at East Lake Golf Club. “I think this week will help decide that.”

Sizzling golf He was right. Four days later, Johnson, 36, of Jupiter, Fla., captured the TOUR Championship to put the last touches on a sizzling late stretch of golf. It capped a 2-1-2-1 finish that began at the PGA Championship at TPC Harding Park in August, and culminated in his first FedExCup championship (see pp. 24-26). For Johnson, one more trophy remained after East Lake: Johnson’s fellow players voted him the recipient of the Jack Nicklaus Award as PGA TOUR Player of the Year. Texan Scottie Scheffler, 25, was the recipient of the PGA TOUR’s Arnold Palmer Award as the circuit’s top rookie. Scheffler did not win a tournament in 2019-20, but had a stout rookie season, posting seven top-10 finishes in 23 starts, including top-5s at the PGA Championship and THE NORTHERN TRUST. At the TOUR Championship, Scheffler rallied to finish fifth in the FedExCup standings.

CJ CUP @ NINE BRIDGES, Sentry Tournament of Champions, World Golf Championships-FedEx St. Jude Invitational), with Morikawa, Rahm and Simpson each winning twice. It marked the second time Johnson won the Nicklaus Award as the TOUR’s top player. He also won in 2016, when he triumphed at the U.S. Open. Johnson, slowed by injury late in 2019, overcame a slow start to his season. He was outside the top 100 in the FedExCup

Dustin Johnson captures the 2020 Jack Nicklaus Award as PGA TOUR Player of the Year after winning his first FedExCup. He won twice in the FedExCup Playoffs and three times on the season.