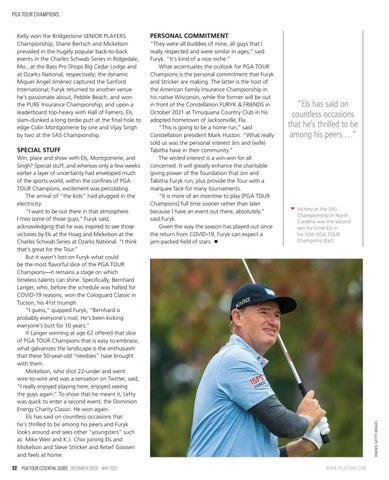 Special Stuff Win, place and show with Els, Montgomerie, and Singh? Special stuff, and whereas only a few weeks earlier a layer of uncertainty had enveloped much of the sports world, within the confines of PGA TOUR Champions, excitement was percolating. The arrival of “the kids” had plugged in the electricity. “I want to be out there in that atmosphere. I miss some of those guys,” Furyk said, acknowledging that he was inspired to see those victories by Els at the Hoag and Mickelson at the Charles Schwab Series at Ozarks National. “I think that’s great for the Tour.” But it wasn’t lost on Furyk what could be the most flavorful slice of the PGA TOUR Champions—it remains a stage on which timeless talents can shine. Specifically, Bernhard Langer, who, before the schedule was halted for COVID-19 reasons, won the Cologuard Classic in Tucson, his 41st triumph. “I guess,” quipped Furyk, “Bernhard is probably everyone’s rival. He’s been kicking everyone’s butt for 10 years.” If Langer winning at age 62 offered that slice of PGA TOUR Champions that is easy to embrace, what galvanizes the landscape is the enthusiasm that these 50-year-old “newbies” have brought with them. Mickelson, who shot 22-under and went wire-to-wire and was a sensation on Twitter, said, “I really enjoyed playing here, enjoyed seeing the guys again.” To show that he meant it, Lefty was quick to enter a second event, the Dominion Energy Charity Classic. He won again. Els has said on countless occasions that he’s thrilled to be among his peers and Furyk looks around and sees other “youngsters” such as Mike Weir and K.J. Choi joining Els and Mickelson and Steve Stricker and Retief Goosen and feels at home. 32

perSonal commitment “They were all buddies of mine, all guys that I really respected and were similar in ages,” said Furyk. “It’s kind of a nice niche.” What accentuates the outlook for PGA TOUR Champions is the personal commitment that Furyk and Stricker are making. The latter is the host of the American Family Insurance Championship in his native Wisconsin, while the former will be out in front of the Constellation FURYK & FRIENDS in October 2021 at Timuquana Country Club in his adopted hometown of Jacksonville, Fla. “This is going to be a home run,” said Constellation president Mark Huston. “What really sold us was the personal interest Jim and (wife) Tabitha have in their community.” The vested interest is a win-win for all concerned. It will greatly enhance the charitable giving power of the foundation that Jim and Tabitha Furyk run, plus provide the Tour with a marquee face for many tournaments. “It is more of an incentive to play [PGA TOUR Champions] full time sooner rather than later because I have an event out there, absolutely,” said Furyk. Given the way the season has played out since the return from COVID-19, Furyk can expect a jam-packed field of stars. 

b Victory at the SAS Championship in North Carolina was the second win for Ernie Els in his 10th PGA TOUR Champions start.

Kelly won the Bridgestone SENIOR PLAYERS Championship; Shane Bertsch and Mickelson prevailed in the hugely popular back-to-back events in the Charles Schwab Series in Ridgedale, Mo., at the Bass Pro Shops Big Cedar Lodge and at Ozarks National, respectively; the dynamic Miguel Angel Jiménez captured the Sanford International; Furyk returned to another venue he’s passionate about, Pebble Beach, and won the PURE Insurance Championship; and upon a leaderboard top-heavy with Hall of Famers, Els slam-dunked a long birdie putt at the final hole to edge Colin Montgomerie by one and Vijay Singh by two at the SAS Championship.